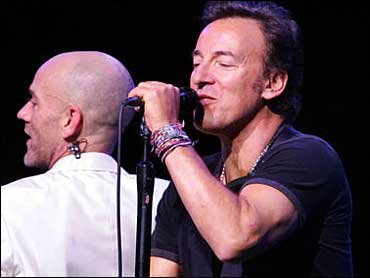 Bruce Springsteen and R.E.M. frontman Michael Stipe stayed on message from the time they took the stage: Vote John Kerry on Nov. 2.

The rockers joined an assortment of performers across the country Friday night in beginning the "Vote for Change" tour, a 10-day series of concerts in battleground states aimed at helping oust President Bush.

Springsteen opened with a solo version of "The Star Spangled Banner," then a rousing rendition of his anti-war anthem "Born in the U.S.A."

"America is not always right - that's a fairy tale you tell your children - but America is always true, and it's in seeking this truth that we find a deeper patriotism," Springsteen told cheering fans after endorsing Kerry, a Democrat.

Springsteen and Stipe, both critics of the war in Iraq, took the stage together to introduce the first band, Bright Eyes, and to remind the crowd to vote.

"This is a very important moment for every one of us and for our country," Stipe said.

Later, during R.E.M.'s hour-long set, Stipe occasionally offered brief political comments. Introducing a song called "Final Straw" that was released the week the United States declared war on Iraq, he asked, "Did anyone watch the debates last night?" Thousands in the packed stadium cheered loudly, many raising their hands.

Across the state, the Dixie Chicks and James Taylor performed in Pittsburgh. Other concerts were held in Erie, State College, Reading and Wilkes-Barre.

"I think our guy did really pretty good last night," Taylor said of Kerry's debate performance. He advised undecided voters to "take a real close look at both of the candidates and then vote for the smart one."

Dixie Chicks' Natalie Maines, once criticized for saying she was ashamed to share her home state of Texas with Mr. Bush, noted that a few people booed Taylor's assessment of Kerry's debate performance.

"We don't feel at home unless we hear some boos, so you're welcome," she said.

A Grammy-winning country-pop group, the Dixie Chicks were founded in Dallas.

The tour, also featuring Pearl Jam, Jackson Browne, Bonnie Raitt, John Mellencamp and others, includes 37 shows in 30 cities through Oct. 11. Proceeds will go to America Coming Together, or ACT, a group raising money for Democratic candidates. Organizers said 90 percent of the shows, including the one in Philadelphia, were sold out as of Friday.

Pearl Jam guitarist Stone Gossard said he wants to convince voters that the Bush administration has been reckless in its foreign policy since Sept. 11.

"For me, personally, I very much want John Kerry to win," Gossard said in an interview. "I think that he's expressed an interest in re-engaging the world community and saying the last administration is not representative of the way America wants to do business with the world."