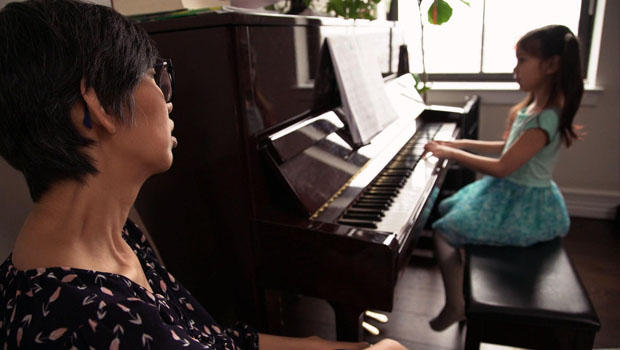 The words BORROWED TIME are anything but a meaningless phrase for the woman you're about to meet -- they're the words she says have defined her life, never more so than now. Our Cover Story is reported by Tracy Smith:

When Julie Yip-Williams found out she was dying of cancer, she wasn't completely surprised.

"I've always felt like I was living on borrowed time," she said.

"Why do you think that is?" asked Smith.

"Look at my life, this crazy life."

She's been thinking a lot about "this crazy life" lately -- how it began, and how it will end.

It started 42 years ago in post-war Vietnam. Julie was born totally blind. Immediately, her grandmother intervened. "She set up a meeting between my parents and this herbalist, and had my mother and father take me to this man," she said.

And her grandma's intention was what? "To have me killed," she said, "because I was blind."

"And she just thought there was absolutely no future in that?"

"There was no future for me, nobody would ever want to marry me, I was an embarrassment to the family," Julie said.

But instead, her life was spared. "The herbalist said, 'I won't participate in this kind of dirty business.' And he walked away."

She was three when her family fled Vietnam for the United States. They made it to California, where she says an eye surgeon changed her life. "Here's my mother who doesn't speak any English, okay? And she gets me to this young pediatric ophthalmologist who has never seen a case like mine before. And he tells her, 'I don't know how much vision I can give her, but we can try.'"

What he gave her was enough, though she is still legally blind. "I cannot drive, I can't play tennis. Like, my dream is to play tennis!"

Still, with an unstoppable will to succeed, she turned her newfound sight -- considered a disability to most -- into a competitive edge.  And this formerly unwanted Vietnamese refugee earned her way into Harvard Law School, and a career as a corporate lawyer.

Smith asked, "How'd you end up at Harvard?"

"I think I was driven by a lot of anger," Yip-Williams said. "I had a lot of anger inside. And the anger came from my family not believing in me."

In fact, her life is now filled with everything her grandmother doubted she'd ever have. Julie did find love with her husband, Josh Williams.  They have two daughters.

But at age 37 she was diagnosed with stage IV colon cancer.  It has an 11% five-year survival rate.  And true to form, for the past five years, she's been fighting with just about every tool in the oncology arsenal.

But when all those treatments failed, the cancer spread.

"No, there's no bouncing back anymore. No."

Facing death, Julie says she knew she had to talk about it. "From the very moment that I had cancer, my kids knew. Sure they were young, one and three. But they had an understanding, some understanding, at that age."

Smith asked, "Did you and Josh make a conscious decision to tell them?"

"I don't know if it was conscious; it was sort of intuitive," Yip-Williams replied. "Because we're both such honest people with our children. And we didn't want to go around trying to avoid the C-word."

When asked what they thought of cancer, Mia replied, "It's bad for you."

Belle said talking to her mother about it makes Julie sad. "Because Mommy's dying."

Smith asked Julie, "Do you worry that it's too much of a burden for these little girls to talk about these things?"

"I think that, you know, I've heard these so-called mental health professionals say, you know, that these kids are just, they're fragile, they're gonna break. And I think, 'Bullsh*t.' You know what I think of kids? They're like weeds, you know, bendable in the wind. As long as we love them, they're gonna have the capacity to get through anything."

Isabelle agrees. When Smith asked her, "What would you say to people out there who say, 'Oh, you're too young to talk about this stuff'?" Isabelle replied, "No, I'm not."

Why not? "Because it's actually happening in real life, and you don't know how it feels like."

Julie hopes that through talking, her daughters won't fear her death.

And she's written a letter to reassure Mia and Isabelle after their mother is gone.

"Sometimes, when you practice your instruments, I close my eyes so I can hear better. And when I do, I am often overcome with this absolute knowing that the music with its special power will beckon me and I will be there."

Smith asked: "What do you hope to impart?"

Julie replied, "I want them to find goodness out of their mother dying so young. I want them to learn how to live with passion, and love. And I want them to also expect that no life is free of hardship. Embrace it, and know that you will come out on the other side stronger."

Four years ago, she started a blog so her daughters would have her thoughts and words when they're older.

"I have often dreamed that when I die, I will finally know what it would be like to see the world without visual impairment, to see far into the distance. ... To see the minute details of a bird, drive a car. Oh how I long to have a perfect vision."

And in one last amazing twist, a major publisher has bought the rights to her blog. The memoir will be released after her death.

Truth is, Julie Yip Williams has a sort of vision the rest of us might envy: the ability to see challenges, and even death, as opportunity, and to face them head-on and with gratitude.

She said, "I've had this life, a somewhat difficult life, you know, where I've had to overcome a lot of things, right? But I want to convey, within every human being is the capacity to overcome those same things. We just have to find it."

EDITOR'S NOTE:
Julie Yip-Williams died on Monday, March 19, 2018, at her home in Brooklyn.