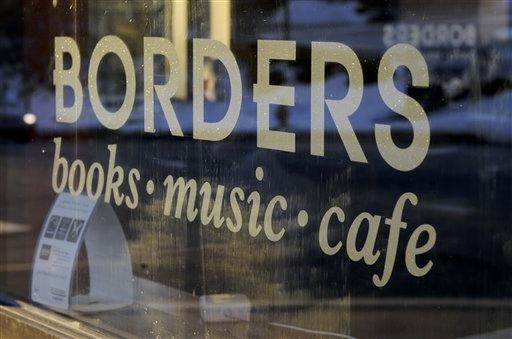 The 40-year-old company plans to close about 200 of its 642 stores over the next few weeks. All of the stores closed will be superstores, Borders spokeswoman Mary Davis said. The company also operates smaller Waldenbooks and Borders Express stores.

Clearance sales could begin as early as this weekend, according to documents filed with the U.S. Bankruptcy Court in New York. Borders said it is losing about $2 million a day at the stores it plans to close.

Cautious consumer spending, negotiations with vendors and a lack of liquidity made it clear Borders "does not have the capital resources it needs to be a viable competitor," Borders Group Inc. President Mike Edwards said in a written statement.

Borders plans to operate normally and honor gift cards and its loyalty program as it reorganizes.

The company will receive $505 million in debtor-in-possession financing from GE Capital and others to help it reorganize.

It owes tens of millions of dollars to publishers, including $41.1 million to Penguin Putnam, $36.9 million to Hachette Book Group, $33.8 million to Simon & Schuster and $33.5 million to Random House.

It's significant that Borders could not reach an agreement with creditors and file a "prepackaged bankruptcy." Said Nejat Seyhun, a bankruptcy expert at the University of Michigan.

It could be a sign that creditors do not believe Borders will be a "viable operation going forward," Seyhun said.

Activist investor William Ackman, whose Pershing Square Management Co. has a nearly 15 percent stake in the company, also stands to be a big loser. Shareholders are often wiped out in a reorganization.

He offered to finance a $16-per-share Borders-led takeover bid for rival Barnes & Noble in December, but nothing materialized.

The filing was expected, but it is far from clear if it will be enough to save the company.

"They are going to have to be an entirely different company than the one that went into bankruptcy protection if they want to emerge successfully," said Jim McTevia, managing partner of turnaround firm McTevia & Associates in Bingham Farms, Mich.

It has been a long fall for the Ann Arbor, Mich., company, which 15 years ago appeared to be the future of bookselling.

Big-box bookstores have struggled as competition has become increasingly tough as books become available in more locations, from Costco to Walmart, online sales grow and electronic books gain in popularity.

Borders also suffered from a series of errors: failing to catch onto the growing importance of the Web and electronic books, not reacting quickly enough to declining music and DVD sales, and hiring four CEOs in 5 years without book-selling experience.

In addition, Americans are simply buying fewer books. Sales fell nearly 5 percent in 2010 to 717.8 million from 751.7 million last year, according to Nielsen, which tracks about 70 percent of book sales but doesn't include Walmart stores.

For book lovers who like to shop in stores, the news was worrisome.

"It's just really sad to hear that happening," said Monika Barera, 50, shopping Wednesday at a Borders store in its hometown of Ann Arbor, Mich. The downtown store she was shopping at isn't closing, but four others in Michigan are. "I just hope they can find a way through."

At its peak in 2003, Borders operated 1,249 Borders and Waldenbooks stores. Now it operates barely half that. Its annual revenue has fallen by about $1 billion since 2006, the last year it reported a profit.

Borders' rival Barnes & Noble, which has 29.8 percent of the book market compared with Borders' 14.3 percent according to IBIS World, has done better by adapting to e-commerce and electronic books more quickly and keeping management stable.

Tom and Louis Borders opened their first store in 1971, selling used books in Ann Arbor, Mich. At the time the brothers were mostly interested in offering other bookstores a system they'd developed for managing inventory.

But in 1973, the store moved to a larger location and starting selling new books. The brothers decided to focus on opening more bookstores.

The birth of the superstore was still a decade away. The Waldenbooks and B. Dalton mall chains, with small, 2,000-square-foot stores and 20,000 to 50,000 titles, were growing rapidly.

Against this backdrop, Borders opened its second location in 1986. From there, the company opened one or two bookstores a year; the pace eventually increased to 40 a year.

The new superstores, in contrast to mall chains, ran 10,000 to 15,000 square feet and offered between 100,000 and 200,000 titles and enticements to linger like comfortable chairs and attractive lighting.

Kmart Corp. saw the potential and acquired Borders in 1992, forming a book unit with Waldenbooks. It then spun the bookstores off as a separate company in 1995, the same year a company called Amazon.com started selling books online.

Analysts say a key error for Borders came in 2001, when it contracted out its e-commerce business to Amazon.com.

"Termites don't team with Orkin," said Simba Information's Norris. "Amazon had no incentive whatsoever to promote Borders. ... It really marked the beginning of the end."

That relationship lasted until 2006. By then, Borders lagged far behind Barnes & Noble, which had been selling books online since 1997.

By the time Borders' current CEO, financier Bennett LeBow, came aboard in May 2010 after investing $25 million into the company, the ship was listing badly.

"This is not a good day for book retailers, book readers and book publishers," Greco said. "It's a serious problem that a major chain that did a nice job for many years could not survive."