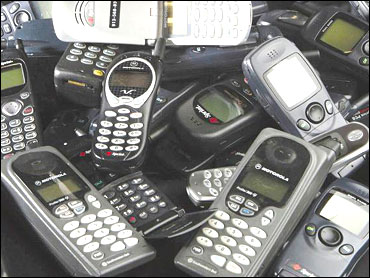 More cell phones than ever were shipped in the fourth quarter, with the industry growing 24 percent over the same quarter last year, the technology research firm IDC reported Thursday.

Nokia Corp.'s introduction of nine new models helped the Finnish phone maker maintain its market-leading position, although No. 2 Motorola Inc. grew at a faster rate on the strength of its own new models, IDC said.

Schaumburg, Ill.-based Motorola strengthened its No. 2 market position with a 16.4 percent share last quarter and a 36.5 percent increase in shipments compared with the previous quarter. Motorola launched more than 20 new devices, including its heavily marketed RAZR V3.

No. 3 Samsung spent most of 2004 closing in on Motorola, but fell further behind in the fourth quarter with a 7 percent decline in shipments compared with the previous quarter. The drop left the South Korean company with a 10.9 percent share.

LG Electronics narrowly overtook Siemens for the No. 4 position, with a 7.2 percent market share to Siemens' 6.9 percent. Other cell phone makers combined had 24.6 percent of the market.

"Now that there is more clarity among the top three spots, the competition will continue to heat up for the final two positions," said Ramon Llamas, research analyst in IDC's Mobile Devices Group.