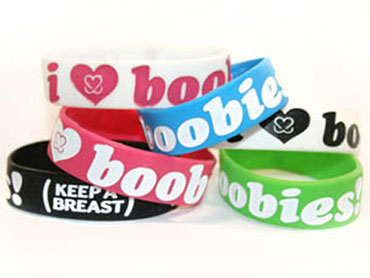 PHILADELPHIA - Breast cancer fundraising bracelets that proclaim "I ♥ boobies!" are not lewd or vulgar and can't be banned by public school officials who find them offensive, a federal judge in Pennsylvania said Tuesday in a preliminary ruling.

The ruling is a victory for two Easton girls suspended for defying a ban on their middle school's Breast Cancer Awareness Day.

"The bracelets ... can reasonably be viewed as speech designed to raise awareness of breast cancer and to reduce stigma associated with openly discussing breast health," U.S. Judge Mary McLaughlin wrote in a 40-page ruling issued Tuesday. She added that the school district had not shown the bracelets would be disruptive in school.

The American Civil Liberties Union, representing the girls, had sued to overturn the ban and stop the school from punishing their clients. McLaughlin issued a temporary injunction Tuesday that bars the Easton Area School District from banning the $4 rubber bracelets until the case goes to trial.

The judge heard testimony from the students and school administrators in December.

Easton is one of several school districts around the country to ban the bracelets, which are distributed by the Keep A Breast Foundation of Carlsbad, Calif. The nonprofit has said it sells the bracelets to engage young people in breast cancer awareness.

Students Brianna Hawk and Kayla Martinez testified that they did not intend the message to be sexual. They received in-school suspensions last fall but hope to have their disciplinary records expunged.

Martinez fought the case in memory of a late aunt who battled breast cancer, she said. Friends have told her that teachers have called the lawsuit a waste of time.

"I thought it was worth my time," Martinez, 13, told The Associated Press on Tuesday. "In our generation, all the teenagers ask me about the bracelet. So it shows the bracelets teach a lot to kids."

The Keep A Breast Foundation — which concedes their message isn't for everyone — gets $1.50 from each bracelet sold by an outside retailer and $4 from its own sales.

Schools from Florida to California have banned the bracelets. One Oregon high school said the message was getting lost on the ninth-grade boys who were wearing them.

The ACLU has intervened in similar school disputes across the country, including a second case in Pennsylvania and one in Wyoming. But the Easton families are the first to file suit

Freund has argued that some in the community perceived the "boobies" message as sexual, even if the girls did not.

McLaughlin, in her ruling, noted that the school itself used the word "boobie" in announcing the ban on the intercom.

"If the phrase "I ♥ Boobies!" appeared in isolation and not within the context of a legitimate, national breast cancer awareness campaign, the school district would have a much stronger argument," McLaughlin wrote. "This is not the case here. One of the bracelets ... did not even contain the word 'boobies,' but rather said 'check y ♥ ur self!!"'

"She rejects the school district argument that it's really just for the school district to decide what is and isn't appropriate language to use in school," Roper said. "You look at it in context. It isn't written on a bathroom wall. It's a breast cancer awareness bracelet."