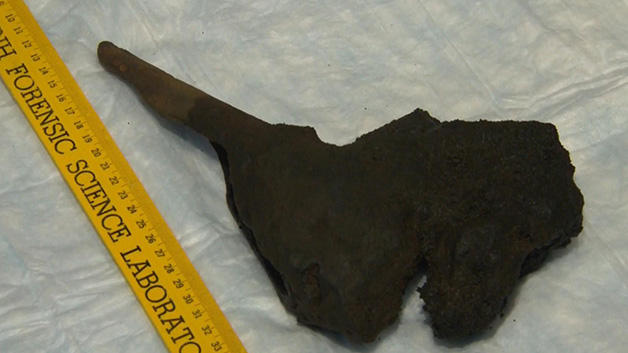 YARMOUTH, Mass. -- In 1984, Barry Clifford found the wreck of the pirate ship Whydah off the coast of Wellfleet. Ever since, he has been salvaging the wreck and has established the Whydah Pirate Museum, showcasing all he has retrieved from the ocean.

Now, he may have found the remains of Capt. Samuel "Black Sam" Bellamy, according to CBS Boston.

"Why we believe that these remains are that of Capt. Sam Bellamy is because of where the remains were found, where the bones were found," said Casey Sherman, a member of the Whydah research team.

A human leg bone was found in the shipwreck near where the pirate's ship sank. Clifford believes the bone, that was removed from a massive clump of sand and iron, belongs to Bellamy because it was found near his pistol.

"Who is this lost pirate? Is it Sam Bellamy," Clifford asked. "Is he African? Is he from Scotland, Ireland, England?"

Clifford has enlisted a team of forensic scientists that will test the DNA from the 300-year-old thigh bone. The team has already located Bellamy's direct descendants in England.

After plundering the West Indies in 1717, Bellamy was heading to Cape Cod to visit his girlfriend when a storm sank the ship. It was loaded with millions of dollars in loot.

Clifford said the search is "far from over" and that the "motherlode is still out there under 30 feet of sand."