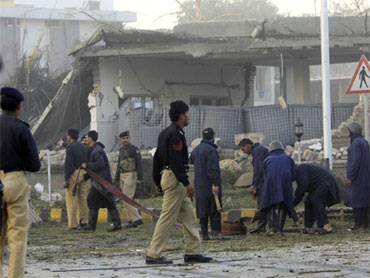 Suicide car bombers killed 16 people and wounded more than 80 in two attacks in northwestern Pakistan on Friday, including a devastating strike on the regional headquarters of the spy agency overseeing much of the country's anti-terror campaign.

The bombings were the latest in a string of attacks on security forces, civilians and Western targets since the government launched an offensive in mid-October against militants in the border region of South Waziristan, where al Qaeda and Taliban leaders are believed to be hiding out.

The attack on the Inter-Services Intelligence agency building occurred in the city of Peshawar, which has borne the brunt of the militants' retaliation against the army offensive. A wave of bombings in the last week alone in and around the city has killed more than 50 people.

Security forces guarding the intelligence complex opened fire on a pickup laden with explosives, but the bomber was able to detonate his payload, said an intelligence official, speaking on condition of anonymity because he was not authorized to talk to the media.

The early morning blast, heard across the city, destroyed much of the three-story building and killed 10 people, including seven who worked for the spy agency, the army said in a statement. Another 55 people were wounded, officials said.

"This is a guerrilla war," said Mian Iftikhar Hussain, the information minister for North West Frontier Province, where Peshawar is the capital. "We will continue our action against these militant terrorists. That is the only way we can survive."

About an hour later, a second suicide car bomber attacked a police station farther south near the Afghan border, killing six people, said police official Tahir Shah. Five of the dead were policemen working at the station in Bakkakhel village in Bannu district; the other was a civilian. Another 27 people were wounded, he said.

The station is close to the border with North Waziristan, an area in Pakistan's semiautonomous tribal region where officials believe many militants have fled to escape the recent army offensive.

The government has vowed the surging militant attacks will not dent the country's resolve to pursue the operation in South Waziristan, where officials say the most deadly insurgent network in Pakistan is based. The army claims to be making good progress.

Friday's attack in Peshawar was the second to target a spy agency complex this year. A suicide squad using guns, grenades and a van packed with explosives attacked a police and an ISI building in Lahore in May, killing 30 people.

The ISI has been involved in scores of covert operations in the northwest against al Qaeda targets since 2001, when many militant leaders crossed into the area following the U.S. led invasion of Afghanistan. The region is seen as a likely hiding place for Osama bin Laden.

Its offices in Peshawar are on the main road leading from the city to Afghanistan. The agency was instrumental in using CIA money to train jihadi groups to fight the Soviet Union in Afghanistan in the 1980s. Despite assisting in the fight against al Qaeda since then, some Western officials consider the agency an unreliable ally and allege it still maintains links with militants.

Regardless, such a devastating blow to the agency's main office in the northwest is a powerful reminder of how brazen the militants have become. CBS News' Farhan Bokhari reports that the ISI is considered the most powerful among Pakistan's intelligence agencies - run by the army headed by a serving Lieutenant General.

"If these militants can target agencies like the ISI, then it is an increasingly serious situation," a Western diplomat based in Islamabad told Bokhari after Friday's blast.

Taliban and al Qaeda fighters are waging a war against the Pakistani government because they deem it un-Islamic and are angry about its alliance with the United States. The insurgency began in earnest in 2007, and attacks have spiked since the run-up to the offensive in South Waziristan.

A car bomb exploded in a market in Peshawar at the end of October, killing at least 112 people in the deadliest attack in Pakistan in over two years. On Oct. 10, a team of militants staged a raid on the army headquarters close to the capital, Islamabad, taking soldiers hostages in a 22-hour standoff that left nine militants and 14 others dead.

The U.S. has urged Pakistan to persevere with its South Waziristan offensive because militants have used the area as a base to attack Western troops across the border in Afghanistan.

Militants have also targeted convoys in Pakistan delivering supplies to soldiers in Afghanistan.

Attackers fired rockets at a group of tankers near the southwestern city of Quetta on Friday that were delivering fuel to U.S. and NATO troops. One driver was killed and five tankers were torched, said local police chief Bedar Ali Magsi.

About 80 percent of all nonessential supplies to Western forces in Afghanistan are trucked through Pakistan after landing at the Arabian Sea port of Karachi. NATO and U.S. officials say the attacks do not affect their operations.