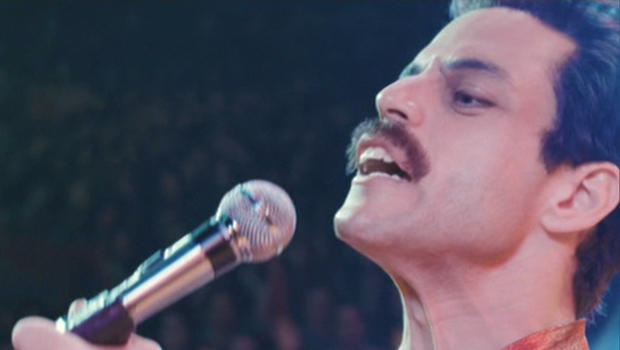 It seems trite given, his extraordinary musical talent, to focus on Freddie Mercury's teeth, but if you're going to make a movie about Queen's legendary frontman, that overbite can't be underestimated.

Rami Malek has already won a Golden Globe, a SAG Award, and a BAFTA, and is nominated for an Oscar, for his portrayal of Mercury in "Bohemian Rhapsody," a singer born with four additional incisors – "More space in my mouth means more range," he proclaimed in the film.

But even Malek admits he couldn't have done it without the man behind that mouth: Chris Lyons, a dental technician by trade.

"It's the biggest tooth movie I've ever worked on," Lyons said.

He does real dental work for real people at his offices outside London, but he has a side business, called Fangs FX. He's helped monsters, and those monstrously famous. He gave Meryl Streep a set of Margaret Thatcher teeth for "The Iron Lady," and gave Tilda Swinton a mouthful of his work, too, for "Snowpiercer." And he helped John Lithgow get those Winston Churchill-like jowls for "The Crown."

As Lithgow told "Sunday Morning" in 2017, Lyons "created these two little blobs that clicked onto my back teeth that just swelled my face, but also changed my diction."

But when asked to re-create Freddie Mercury's teeth, Lyons worried he may have bitten off more than he could chew.

Correspondent Lee Cowan asked, "When the offer first came to you, it's pretty daunting in this particular case, out of all the teeth you've done, 'cause these are almost like a character."

"It's an iconic set of teeth for an iconic character from an iconic band," Lyons said. "Everybody knows Freddie's teeth, and yes, I was very worried."

As the story goes, Mercury didn't want to change his teeth because he feared it might change the sound of his voice.

Lyons started off making a set of incisors the same size as Mercury's, but when worn by Malek, it was too much: "It was too ludicrous, 'cause it just became a total caricature,' Lyons said.

So, he kept scaling them back.

The teeth, however, were only the first bite in a transformation that make-up artist Jan Sewell and prosthetic designer Mark Coulier had to finish. Coulier said, "[Malek] doesn't look anything like Freddie Mercury really, so you just then have to dial all that back, and then choose something that's gonna just enhance or create an essence of [him]."

Creating that "essence" of Freddie Mercury would also involve a bit of a nose job, to match Mercury's aquiline nose.

It was sculpted at Coulier Creatures FX, a macabre place where disembodied heads stare back at you from almost every angle. "We did a face cast of Rami, but we also did this 3D print of his head," Coulier said. "so when we sculpt the piece we know it's gonna fit in with his eyebrows."

Then there was the body hair that Mercury so often showed off, starting with that ultra-thin '80s mustache of his.

Sewell showed Cowan the mustache application, constructed on fine lace: "Each hair is individually knotted on this extremely fine lace."

"And did you do the chest hair, too?" Cowan asked.

"Yeah, 'cause he was just not quite as hairy as Freddie."

"And even underarm hair?"

"No, that's all his. He can take credit for all of that!"

When the final look all came together, the likeness was almost eerie.

"He didn't come out as Rami, then go into Freddie," said Lyons. "He stomped out as Freddie and it was just like, 'Oh my God, this is really gonna work. I think we cracked it, I think.'"

There's no Oscar for best supporting teeth, but another big win for Rami Malek at tonight's Academy Awards will undoubtedly leave him all smiles.