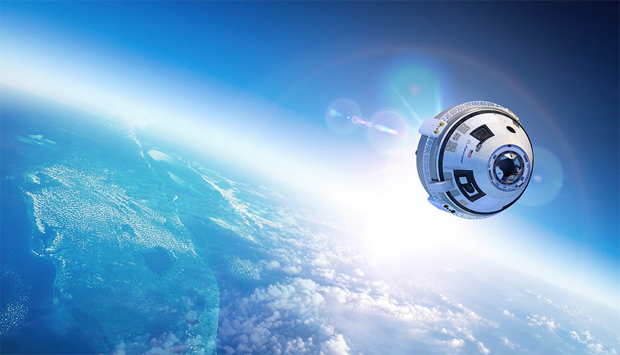 Boeing unveiled the name of its CST-100 commercial crew ferry ship Friday -- the "Starliner" -- and dedicated a repurposed shuttle processing facility at the Kennedy Space Center where the new spacecraft will be built and tested before flights carrying astronauts to and from the International Space Station.

Under a $4.2 billion contract with NASA, Boeing is building the first Starliner structural test article in the former shuttle processing hangar and eventually plans to build at least three flight-qualified spacecraft, each one certified for 10 flights, that will help end the agency's sole reliance on Russian Soyuz ferry craft.

The Boeing spacecraft can carry up to seven passengers or a mixture of smaller crews and cargo. It will take off atop United Launch Alliance Atlas 5 rockets at the Cape Canaveral Air Force Station, land with parachutes and airbags in the western United States -- five sites are under evaluation -- and be hauled back to Florida for refurbishment and relaunch.

The company also is bidding on another NASA contract to deliver supplies to the station using an unpiloted version of the CST-100. U.S station resupply missions currently are flown by SpaceX and Orbital Sciences Corp. under contracts totaling $3.5 billion that run through mid 2018.

"In 35 states, 350 American companies are working to make it possible for the greatest country on Earth to once again launch our own astronauts into space," NASA Administrator Charles Bolden told a cheering crowd of Boeing managers, employees and dignitaries, including Sen. Bill Nelson and Florida Gov. Rick Scott.

"But right here, today, we're focused on one state -- Florida -- and the incredible things the Boeing company has done with this former orbiter processing facility, transforming it into a state-of-the-art place where a new American spacecraft will emerge."

SpaceX also is developing a commercial crew transport craft based on its Dragon cargo ship design under a separate $2.6 billion contract with NASA. Both companies hope to carry out initial piloted test flights in 2017.

Boeing's plan calls for an unpiloted test flight in May 2017, an on-the-pad launch abort test in August 2017, a piloted test flight the following month and the first operational crew ferry flight to the space station in December 2017.

The current contract calls for up to six operational flights with at least two missions guaranteed. In May, NASA officially ordered the first such flight and later named a cadre of four astronauts who will train for commercial crew operations.

The test flight that will precede the operational missions will be flown by a NASA astronaut and a Boeing test pilot, widely expected to be Chris Ferguson, a former astronaut who commanded the final space shuttle mission in 2011 and now serves as Boeing's director of crew and mission operations.

But the Starliner assembly and test schedule assumes NASA gets $1.2 billion in funding in fiscal 2016 as requested by the Obama administration. Draft legislation in the House would cut that to $1 billion while the Senate would reduce it to $900 million.

As a result, NASA recently extended its contract with Roscosmos, the Russian federal space agency, informing Congress that it plans to spend another $490 million to secure six more Soyuz seats for U.S. and partner astronauts through 2018 and landing support into 2019. That's on top of a $458 million contract last year for six seats through the end of 2017.

In a letter informing lawmakers of the decision to buy additional Soyuz seats, Bolden complained that previous commercial crew funding shortfalls have "resulted in continued sole reliance on the Russian Soyuz spacecraft as our crew transport vehicle for American and international partner crews to the ISS."

The proposed 2016 budget "would result in NASA's inability to fund several planned (contract) milestones in FY 2016 and would likely result in funds running out for both contractors during the spring/summer of FY 2016."

Nelson said Friday he is still optimistic Congress will restore at least some of the requested commercial crew funding. But he warned that given the "chaos" of presidential politics and widespread partisanship, NASA faces the prospect of a continuing resolution that would freeze funding at last year's levels.

"We just simply have to get that up," Nelson told CBS News. "If you don't put the money here now it's just going to be dished out to Vladimir Putin."

Making the point by coincidence if nothing else, the Boeing dedication came just a few hours after the docking of the latest Soyuz spacecraft at the International Space Station.