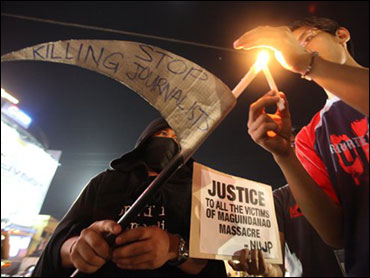 Philippine authorities, under intense public pressure to make arrests in the country's worst election massacre, said Wednesday they are investigating a member of a powerful clan allied with the government along with four police commanders.

Officials recovered 11 more bodies Wednesday — six in a large pit buried alongside three vehicles and five in a mass grave — bringing the death toll in Monday's attack on an election caravan to 57, including 18 journalists.

The military also announced it will disarm two government-armed civilian militia companies, or about 200 men, in southern Maguindanao province, which is ruled by the powerful Ampatuan clan. The militia are meant to act as an auxiliary force to the military and police in fighting rebels and criminals but often serve as a private security force of local warlords.

All the firearms, ammunition, equipment and uniforms of the militiamen are to be turned over to the army's 6th Infantry Division, armed forces spokesman Lt. Col. Romeo Brawner said. He said the military also has revoked all its permits to carry firearms in Maguindanao and Sultan Kudarat, the two provinces now under a state of emergency.

No suspects have been formally named in the killings, which provoked outrage beyond the Philippines, with U.N. Secretary-General Ban Ki-moon and media and human rights watchdogs calling on President Gloria Macapagal Arroyo to swiftly punish the attackers.

In a statement, the U.S. Embassy in Manila condemned the killings.

"Such barbaric acts violate the most fundamental principles of human rights and democracy," Ambassador Kristie Kenney said. "We strongly believe that a thorough, rapid, and transparent investigation must be conducted, and those responsible must be brought to swift justice."

Arroyo vowed justice for the victims and declared a national day of mourning for them.

"This is a supreme act of inhumanity that is a blight on our nation," she said in a statement. "The perpetrators will not escape justice. The law will haunt them until they are caught."

The bodies were found sprawled a few miles (kilometers) off the main highway in southern Maguindanao province on a remote hilltop, and in three nearby mass graves.

The vehicles — a sedan and two vans — were crushed by a large backhoe that ran over and buried them, crime investigator Jose Garcia said. Police were trying to determine whether the vehicles were part of the caravan.

The dead included the wife and two sisters of gubernatorial candidate Ismael Mangudadatu and 18 Filipino journalists who were accompanying the caravan to file his election papers. It is the highest number of reporters killed in a single attack anywhere in the world, according to media groups.

Mangudadatu, after receiving death threats, had sent his wife and relatives instead to submit his candidacy. He wanted to challenge clan rival Andal Ampatuan Jr., who currently serves as a town mayor and whose family has ruled the province unopposed since 2001 with an iron fist backed up by private armies and legions of bodyguards.

Mangudadatu said four people whom he refused to identify told him that the convoy was stopped by dozens of gunmen loyal to Ampatuan. Police said they are investigating reports that Ampatuan, four police commanders, and dozens of police and pro-government militiamen were among the gunmen who blocked the convoy.

National Police Chief Jesus Versoza said the four commanders — including one provincial police chief — were relieved of their duties and confined to camp while being investigated.

Few think Arroyo will be successful in restoring the rule of law in the impoverished, lawless region that has been outside the central government's reach for generations, and where warlords backed by private armies go by their own rules. Maguindanao's acting governor is Sajid Ampatuan, another son of former Gov. Andal Ampatuan Sr., the clan's patriarch. Members of the family could not be reached for comment.

The clan helped deliver votes for the Arroyo administration in 2004 elections. Human Rights Watch expressed concern Wednesday that the administration's relationship with the family would hinder an impartial investigation.

Arroyo's peace adviser, Jesus Dureza, said he met Tuesday with Andal Ampatuan Sr. and received assurances that his family would cooperate in the probe. Many throughout the Philippines expressed skepticism.

Leila de Lima, chairwoman of the independent Commission on Human Rights, who sent a team to the area to monitor the investigation, said there was "strong circumstantial evidence" implicating the Ampatuans.

Ban, the U.N. chief, condemned what he called a "heinous crime" and hoped that no effort would be spared to bring the perpetrators to justice, U.N. spokeswoman Michele Montas said.