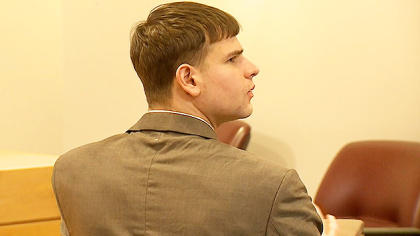 CONCORD, N.H. — A Vermont man accused by family members of killing his millionaire grandfather and possibly his mother in an attempt to collect inheritance money was back in court Tuesday, but offered few clues in court regarding the deaths or his possible role in them. Nathan Carman has denied any involvement in either death.

Carman was in Concord, New Hampshire for a court hearing on Tuesday in response to a lawsuit filed by his aunts, reports CBS Boston. He is defending himself after firing his attorneys earlier this year.

Lawyers representing two of Carman's aunts were hoping to compel him to provide documents related to a semi-automatic rifle he bought that was similar to one used in the 2013 shooting death of his grandfather, real estate developer John Chakalos, in Connecticut. The family also has sought answers related to the the day his boat sank with his mother, Linda Carman, aboard near Rhode Island in 2016.

In July, Carman's mother's three sisters filed the lawsuit in New Hampshire accusing him of killing his grandfather and possibly his mother. They have asked a judge to block him from collecting money from his grandfather's estate.

Carman has been called a suspect in Chakalos' death, but was never charged in the killing. In his will, Chakalos left an estate worth more than $42 million to his four adult daughters, including Carman's mother. Seven million of that could go to Carman.

Carman came off as composed but a little awkward for most of the 90-minute hearing. Afterward, he walked stiffly past reporters without answering questions, and drove off in a beaten-up Ford Focus.

In the New Hampshire case, Carman has invoked the Fifth Amendment in refusing to provide bank, tax and other financial records. Carman told the court he does not have the documents his aunts' attorneys are looking for, and that he did not file taxes years ago because he was a teenager, reports CBS Boston. He claimed he couldn't provide information on the gun due to strict gun laws in Connecticut.

Judge David King said Carman could be compelled to provide the information but said he would take the request for documents under advisement. He told Carman the family's attorneys could depose him and he could be called as a witness in the case.

Along with the Rhode Island case, Carman and the insurer for his boat, the Chicken Pox, are fighting over his insurance claim in a Rhode Island court. Documents filed by the insurance company allege that he made several dangerous alterations to the boat prior to the incident.

On Tuesday, he mentioned his grandfather and mother and even referenced the fact he was suspected in their deaths. But he didn't implicate himself in either case and suggested other relatives could be to blame. According to CBS Boston, Carman said that his aunts had more motive than he did to murder Chakalos.

"My concern, it's not the money," Carman told the court. "It's not so much even my freedom. It is my reputation and seeing I have a future going forward ... I am very concerned about protecting that future." The aunts are trying to block his inheritance.

After the judge said he was concerned Carman was representing himself in a "murder case" in which "the stakes are pretty high for you financially," Carman said he would get new attorneys. Carman said that to fund the new legal team, he had put his three-bedroom house on the market. The house is listed for $149,000.

Carman accused his previous attorneys of lacking basic competence and the time needed to devote to the case.

"I came away sensing that he is making up a new round of stories," Small said. "It's like the carnival whack-a-mole game where the moles keep coming up and you have to pound them down. That's sort of what is going on here with Nathan inventing new stories."

Small called Carman's implication that other relatives were behind the deaths a "terrible and offensive statement" and said he found it interesting Carman would bring up the deaths and the possibility of being involved.

"I'm very clear in my mind that Nathan killed his grandfather and killed his mother," Small said. "There were several times today where he was having trouble navigating around that."

A 2014 search warrant obtained by the AP said that Carman was the last person known to have seen Chakalos alive; that Carman had bought a rifle consistent with the one used in the crime; and that he discarded his hard drive and GPS unit used around the time of the shooting.

Police submitted an arrest warrant to a prosecutor, but it was returned unsigned with a request for more information.

Carman has been called a suspect in the 2013 shooting death of real estate developer John Chakalos in Connecticut. No one has been arrested. He also has been questioned about the day his boat sank with his mother, Linda Carman, aboard near Rhode Island in 2016. She's presumed dead.

Carman has denied any involvement in either case.