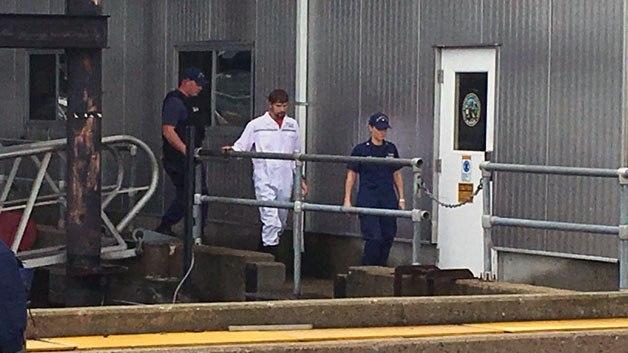 BOSTON - A Vermont man who spent a week at sea in a life raft before being rescued by a passing freighter returned to Boston Tuesday to be reunited with his family, while his mother is still unaccounted for and presumed dead.

Nathan Carman, 22, of Vernon, arrived aboard the freighter that rescued him Sunday off the coast of Massachusetts. His mother, Linda Carman, 54, of Middletown, Connecticut, has not been found and is presumed dead.

The mother and son disappeared Sept. 18 after leaving a Rhode Island marina to go on a fishing trip in the son’s 31-foot aluminum boat named the Chicken Pox.

The Coast Guard had suspended its search for the pair Friday. A private freighter found Carman two days later - in good condition - about 100 nautical miles south of Martha’s Vineyard floating on a life raft.

Family members have said the son has Asperger’s syndrome, a form of autism.

Aboard the freighter, he spoke by phone to a Coast Guard command center in Boston. Petty Officer 3rd Class Nicole Groll, a Coast Guard spokeswoman, said Carman told the Coast Guard that when the boat started to sink, it went down quickly.

“He looked for his mother and did not see her. He had some food and water, and he jumped into the life raft, and that was it,” Groll told The Associated Press.

Groll said the Coast Guard did not receive a distress call. She said that it is unclear whether the boat was equipped with a VHF radio but that recreational boaters are urged to carry a radio so they can contact the Coast Guard in an emergency.

Sharon Hartstein, a friend of Linda Carman’s, said she had a wide range of emotions when she heard Nathan had been found alive.

“I was ecstatic, and then I found out Linda wasn’t with him, and I was terrified,” Hartstein said.

The Coast Guard said they have no plans to reopen the search for Linda Carman.

“We are beyond the survivability window,” Groll said.

Nathan Carman was also the object of a search in 2011, when he was 17. At the time, his parents said he vanished after he became distraught over the death of his horse. He was found several days later in Sussex County, Virginia.

The family was also struck by tragedy in 2013 when Linda Carman’s 87-year-old father, John Chakalos, of Windsor, Connecticut, was found fatally shot in his home. The death was ruled a homicide; no arrest has been made. Earlier this year, the family offered a $250,000 reward for information leading to an arrest and conviction of Chakalos’ killer.