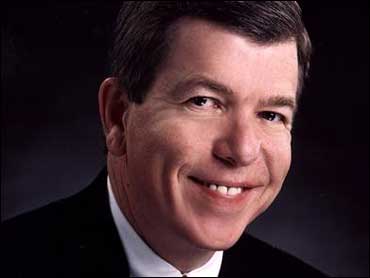 At issue is a measure to stop the smuggling of contraband cigarettes that Blunt, R-Mo., tried to quietly slip into the 2002 bill creating the Homeland Security Department. Blunt pushed the provision at the request of Philip Morris, to which he has close personal and political ties.

The provision was yanked out of the bill as soon as Speaker Dennis Hastert, R-Ill., found out about it, according to a report in Wednesday's Washington Post.

Democratic Party officials accused Blunt of exploiting his position to benefit a contributor.

Blunt responded that his effort was an attempt to cut off a funding source for terrorists and said he would continue to support the measure.

"This is another example of how House Republican leaders have tried to turn our homeland security agency into their own 'Department of Political Security,'" said Kori Bernards, a spokeswoman for the House Democrats' campaign committee.

Missouri Democratic Party spokesman Mike Kelley called Blunt's actions an ongoing effort "to benefit contributors and his family at the detriment of his constituents."

Blunt also reportedly has a close personal relationship with a Phillip Morris lobbyist named Abigail Perlman. Blunt would not discuss their relationship, telling the Post, "I am just going to talk about policy here."

Phillip Morris and its employees have contributed more than $140,000 to Blunt and his fund-raising committees, Federal Election Commission reports show. Blunt, the third-ranking House GOP leader, has been a rainmaker for his colleagues, raising an estimated $6 million for candidates in the 2002 election cycle.

Blunt issued a statement Wednesday afternoon defending the measure, pointing out it was introduced in the Senate before he proposed it last year. It was reintroduced this month by Sens. Orrin Hatch, R-Utah, and Herb Kohl, D-Wis.

"The provision that I worked to include in the homeland security bill would have cracked down on the illegal sale of contraband cigarettes to fund terrorist activities," Blunt said. "National news accounts have documented this disturbing source of funds for some of the most dangerous terrorist organizations. It's a serious homeland security issue, and this proposal would help the United States thwart terrorists who engage in cigarette trafficking and sales to finance their operations."