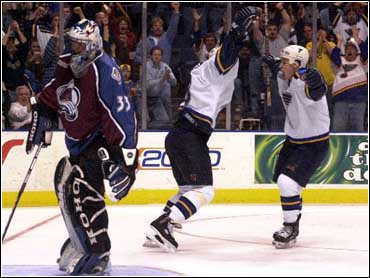 So far, the Stephane Richer trade is looking like a beauty for the St. Louis Blues.

Richer scored three goals as the Blues regained first place overall in the NHL with a 4-2 victory over the Colorado Avalanche on Friday night.

"I'm really lucky," Richer said. "I'm playing with great players and a great team. I'm trying to get my confidence and my shape back, because it's been a long year for me."

Richer has six goals in 17 games with the Blues since being acquired in January from the Tampa Bay Lightning for defenseman Chris McAlpine and goalie Rich Parent. His first goal with the Blues was No. 400 of his career, after the end of his 1 1-2 seasons with the Lightning saw him demoted to the minors.

Richer got the game's first goal on a rebound in the first period and scored on a one-timer from Demitra on the power play at 47 seconds of the third. He added an empty-net goal with 20.8 seconds to go for his 10th career hat trick and first since 1996.

He was even happier to get the hat trick against Roy, who is one victory shy of a tie for second place on the career list. Roy has 433 victories, just behind Jacques Plante.

"To score a hat trick against one of the top goalies in the world, it's always nice," Richer said. "I don't think he was too happy."

Richer was correct about Roy's state of mind.

Craig Conroy swept in a one-handed rebound shot to snap a third-period tie for St. Louis. The Blues, who had a 31-14 shots advantage, have won six in a row and 12 of 13 to lead the New Jersey Devils by two points.

On Wednesday, the Blues won thir team-record ninth straight game on the road.

"Right now we just don't feel like we're going to lose," Conroy said. "Whatever happens, we feel this team's going to win."

Martin Skoula and Jon Klemm scored for the Avalanche, 1-5-1 in their last seven games. All five losses were by a single goal.

The Blues prevailed despite allowing a third-period goal for the first time in nine games, since Feb. 1. Klemm tied it on a wrist shot from the point that deflected off the leg of Blues defenseman Chris Pronger and eluded goalie Roman Turek at 3:53 of the third.

But that was Colorado's only shot of the third period.

On the winner, Roy stopped Demitra's drive from the left point. Conroy snared the rebound and with one hand on the stick slid it off the skate of Avalanche defenseman Alexei Gusarov into the net at 8:19.

"I'm always the big save of the night," Conroy said. "It seems like if they're going to make a big save it's against me, so it's nice to finally get a cheesy one."

Avalanche defenseman Aaron Miller kept it from becoming a two-goal deficit with about 5 1-2 minutes left, stopping a shot from Marty Reasoner from just outside the crease when Roy got caught out of the net.

Skoula got his first goal since Nov. 30 at three minutes of the second period, beating Turek after Brian Rolston's shot deflected off the skate of the Blues' Jamal Mayers.