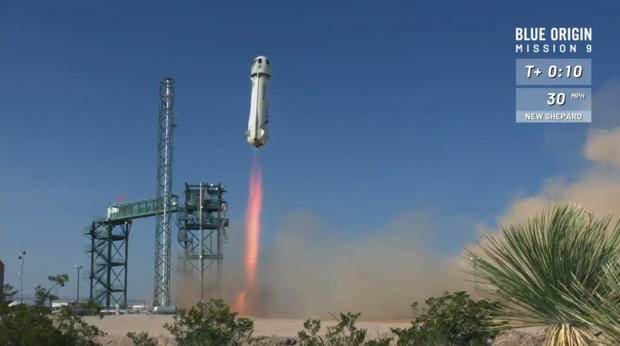 A Blue Origin New Shepard spacecraft — the vehicle Amazon founder Jeff Bezos is developing to carry tourists on sub-orbital rides into space —rocketed away from Texas early Wednesday and then fired its abort motor to quickly push the capsule away in a high-altitude test of its safety systems.

The roomy capsule, packed with experiments and an instrumented test dummy known as Mannequin Skywalker, rapidly shot away atop a brilliant jet of flame and 70,000 pounds of thrust, demonstrating the quick-response safety system will work if needed, regardless of the altitude.

Two successful abort tests were carried out earlier, one from ground level in 2012 and a second at mid-level altitudes during a 2016 test flight. Wednesday's flight tested the system at high altitude, just after the booster's BE-3 engine shut down following a smooth climb out of the thick lower atmosphere.

During the 2016 test, ignition of the escape motor did not noticeably affect the reusable booster, which continued to fire before shutting down normally and falling back to Earth for a rocket-powered upright landing.

Likewise during Wednesday's flight, the booster appeared to behave normally despite the sudden rush of exhaust and the powerful thrust of the abort motor. The rocket chalked up a seemingly flawless launch and then fell back to Earth, re-starting its hydrogen-fueled BE-3 main engine, deploying four landing legs and settling to a picture-perfect touchdown on a circular pad.

The capsule, meanwhile, climbed to a maximum altitude of around 393,000 feet — more than 74 miles — subjecting an instrumented test dummy — "Mannequin Skywalker" — to about 10 times the force of gravity during the brief abort motor firing, which pushed the craft about 50,000 feet higher than a normal flight.

After that, the capsule's experiments enjoyed about five minutes of weightlessness as the spacecraft arced over at the top of its trajectory before plunging back into the discernible atmosphere.

Moments later, small drogue parachutes deployed to slow and stabilize the capsule before three huge blue-and-orange chutes unfurled to lower the spacecraft to a gentle landing.

"Anything could have happened today, and this is the best possible outcome," said Ariane Cornell, Blue Origin's launch commentator. "Mannequin had a smooth, smooth landing."

Blue Origin has now tested its powerful escape system at low, mid level and high altitudes, building confidence the spacecraft and its eventual passengers can, in fact, survive a catastrophic in-fight booster failure.

The solid-fuel "pusher" abort motor, built by Aerojet Rocketdyne with subsystems provided by Blue Origin, is designed to quickly ignite on command from flight controllers or an on-board computer if safety software detects an impending booster malfunction, rapidly propelling the capsule and its crew away from the rocket with a jarring burst of acceleration.

It is a so-called "full envelope" abort system, meaning it is designed to operate in all phases of flight, from ground level to high altitudes and any point in between. Unlike NASA's Mercury and Apollo spacecraft, which jettisoned their escape rockets before reaching orbit, Blue Origin's is built into the capsule. After a successful launch, it will be available for use on the capsule's next flight.

Bezos is developing the reusable New Shepard rocket and capsule to carry up to six space tourists, researchers and/or experiments on brief sub-orbital flights out of the discernible atmosphere to altitudes just above 100 kilometers — 62 miles — the generally accepted "boundary" of space.

Strapped into reclining seats at launch, the New Shepard passengers will be able to unstrap and briefly float about the cabin near the top of its trajectory when they will experience five to six minutes of weightlessness and enjoy the view from the largest windows ever built into an operational spacecraft.

Piloted test flights are expected to start later this year, but no target dates have been announced.

It's also not yet known how much Blue Origin plans to charge for rides in a New Shepard capsule. The Reuters news agency, quoting an unnamed source, recently reported that tickets were expected to initially cost between $200,000 and $300,000, making it competitive with rides aboard the winged spaceplane Richard Branson's Virgin Galactic is developing.

But Blue Origin officials have not announced pricing or when tickets might go on sale.

"We haven't started selling tickets yet for the trip to space," said Ariane Cornell, Blue Origin's launch commentator. "We haven't set a price. We haven't released those details. It's coming, but we've got our eye on the prize, and we've got to make sure we understand our system through and through. That means understanding everything that's necessary for human spaceflight, including the escape system."

But if all goes well, she said, "it's going to be a sweet ride."

For Wednesday's flight, the spacecraft was loaded with a variety of experiments, including instrumentation provided by NASA to measure pressure, acoustics, acceleration and other factors, a WiFi experiment, a study of how fine particles interact in random collisions and another NASA experiment to learn more about how water droplets behave in microgravity.

Other experiments included one to measure magnetic fields inside the capsule and another to test a vibration isolation platform that could be used by future payloads to further reduce vibrations for "higher precision microgravity studies."

Blue Origin has completed a sprawling rocket factory near the Kennedy Space Center in Florida to build New Glenn rockets and is developing a launch pad at the nearby Cape Canaveral Air Force Station. The New Glenn will compete with United Launch Alliance's upcoming Vulcan rocket and with SpaceX boosters in the U.S. launch market.

InSight Mars lander nears the end of the road