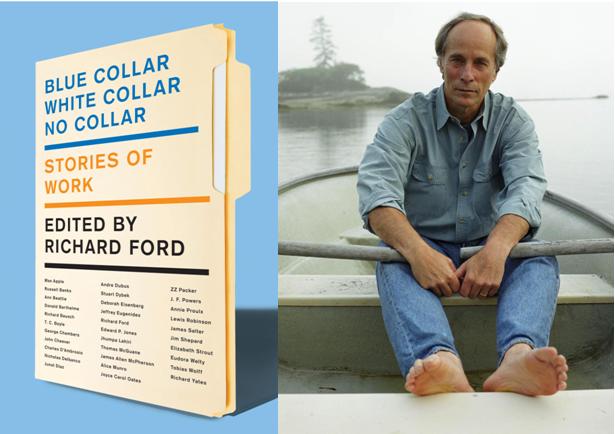 Richard Ford: I was inspired by wanting to contribute in some way to the 826 initiative, which now exists all over the country - helping young school-age kids to write. The Michigan affiliate in Ann Arbor invited me to dream up something I could do. And this anthology was it. Michigan being Michigan (the State that is), work is an abiding preoccupation, and one the place is sort of famous for. I have a lot of Michigan in my background - went to college there, taught at UM, taught high school in Flint, wooed my wife there. I was happy to seize an opportunity to be useful.

RF: Well, "editing" is probably a misstatement. I rounded up the stories I put in the book; but there was no real editing, just choosing. Maybe it's the optic through which I was gazing, but so much of American fiction and its representative human-like characters find plausibility in work. If stories have work somewhere in them (people going to jobs, not having jobs, being happy or sad with their employment), then the stories and the people themselves seem to make completer, easier sense to me. We get it, and them. I wasn't so surprised as much as pleased to see how much good fiction contributes to what we might think we already know (but really didn't) about work. So much of what we say about work emerges from conventional "wisdom." Fiction can teach us things here, as well as please us. And it does both.

RF: I'm sixty-seven, so I'm probably too old to be doing anything else. Once upon a time I went to law school; so I'd likely be one of those poor guys, possibly deceased. Compared to almost anything I can now think of writing's about the easiest thing a person can do. And you can't really retire from it - they're no benefits. You just schlump forward on your desk one day and somebody comes and takes you away. I was once a sports writer, and I liked that.

RF: I'm about to read Franzen's novel "Freedom," which I think I'll probably love. I read a lot, and not surprisingly a lot of what I read is just so-so. But why should fiction be any different from, say, buying automobiles or have your gall bladder removed at the local hospital instead of at the Mayor Clinic. I read recently several novels of the Indian novelist R.K. Narayan, and was very happy I did. I've read Pamuk and was pleased that a novel I'd have imagined having no natural purchase on would've made me so happy. It's his novel "My Name is Red".

RF: What's next for me? I'm in the last bits of writing a novel called "Canada" (first-time-through). What's next? Trying to get the end of that and finish strong.