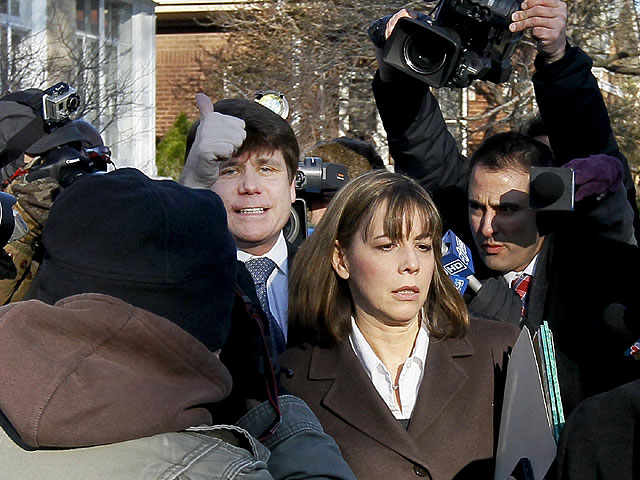 CHICAGO - Former Gov. Rod Blagojevich is making his final plea for leniency to the judge who will impose his sentence, saying he "never set out to break the law."

While he apologized for his crimes, Blagojevich said he did not know he was breaking the law. He told Judge James Zagel that he thought what he was doing was "permissible," but that he was mistaken.

Blagojevich said he acknowledges his crimes and is "unbelievably sorry." He says he's made "terrible mistakes."

The impeached Illinois governor spoke Wednesday as he waits to learn his punishment on charges that include trying to sell an appointment to President Barack Obama's old Senate seat.

Prosecutors have asked for a prison sentence of 15-20 years, with assistant U.S. Attorney Reid Schar saying he held up funding to every hospital in the state for 30 days and held up an appointment to the Senate seat while crucial votes were being taken.

Schar says what Blagojevich did "eroded" public confidence in government.

The prosecutor told Zagel that Blagojevich, a lawyer and federal prosecutor, knew what he was doing was illegal, repeatedly saying the "law was not murky" to Blagojevich when he engaged in scheme after scheme.

"The law was not murky after the defendant did not get money from Children's (Hospital) when he put on hold money that would have helped sick children," Schar said.

Nearly three years to the day since Blagojevich's arrest while still in office, the first day of the sentencing hearing Tuesday featured an admission by Blagojevich's attorneys that he was, in fact, guilty of public corruption. For years, the former governor and his team had strenuously avoided acknowledging that.

But earlier Tuesday, Zagel seemed to signal he may be ready to impose a stiff prison sentence, telling the courtroom he thought Blagojevich lied when he testified on the stand at his retrial that he never sought to sell or trade the Senate seat.

One unknown before this week's hearing began was whether defense lawyers and Blagojevich intended to strike a conciliatory tone or continue to sound defiant, an approach legal observers widely agreed would be a monumental mistake.

The defense admission of guilt came as something of a surprise — just days after defense filings declared Blagojevich's innocence.

While attorney Sheldon Sorosky told Zagel on Tuesday that Blagojevich committed the crimes, he insisted that none justified anywhere close to the 15- to 20-year prison term prosecutors wanted.

Otherwise known for his jocular personality, the impeached governor-turned-reality TV star cut a somber figure Tuesday. He pulled nervously at his fingers as attorneys spoke, pausing occasionally to sip on a plastic bottle of Cherry Coke.

In an emotional few minutes before proceedings ended Tuesday, defense attorney Aaron Goldstein said locking Blagojevich up for a long time would devastate his wife and two school-age daughters.

When Goldstein began reading a letter from Blagojevich's oldest daughter, 15-year-old Amy, asking the judge not to lock her father up, Blagojevich seemed to fight to maintain his composure, biting on his lip.

In another letter, Blagojevich's wife, Patti, asked Zagel to "please be merciful." She began sobbing when Goldstein played a recording of a giddy Blagojevich calling his younger daughter, who is now 8, and putting on a baby voice, saying "Hey Annie!"

Prosecutors have said Blagojevich hasn't previously displayed any remorse and has thumbed his nose at the justice system. But Blagojevich's attorneys said he has already paid a price in public ridicule and financial ruin — proposing a term of no more than a few years.

Blagojevich's sentencing comes just days before his 55th birthday and three years to the week of his Dec. 9, 2008, arrest. The jury deadlocked in his first trial, agreeing on just one of 24 counts — that Blagojevich lied to the FBI. Jurors at his retrial convicted him on 17 of 20 counts, including bribery.

Among the court attendees in court Tuesday were more than a dozen jurors from both of Blagojevich's trials, including both foremen. Several said they would attend Wednesday also.

After sentencing, Zagel will likely give Blagojevich at least weeks before he must report to prison. Once there, the man heard scoffing on FBI wiretaps about earning a low six-figure salary would have to take a prison job — possibly scrubbing toilets — at just 12 cents an hour.