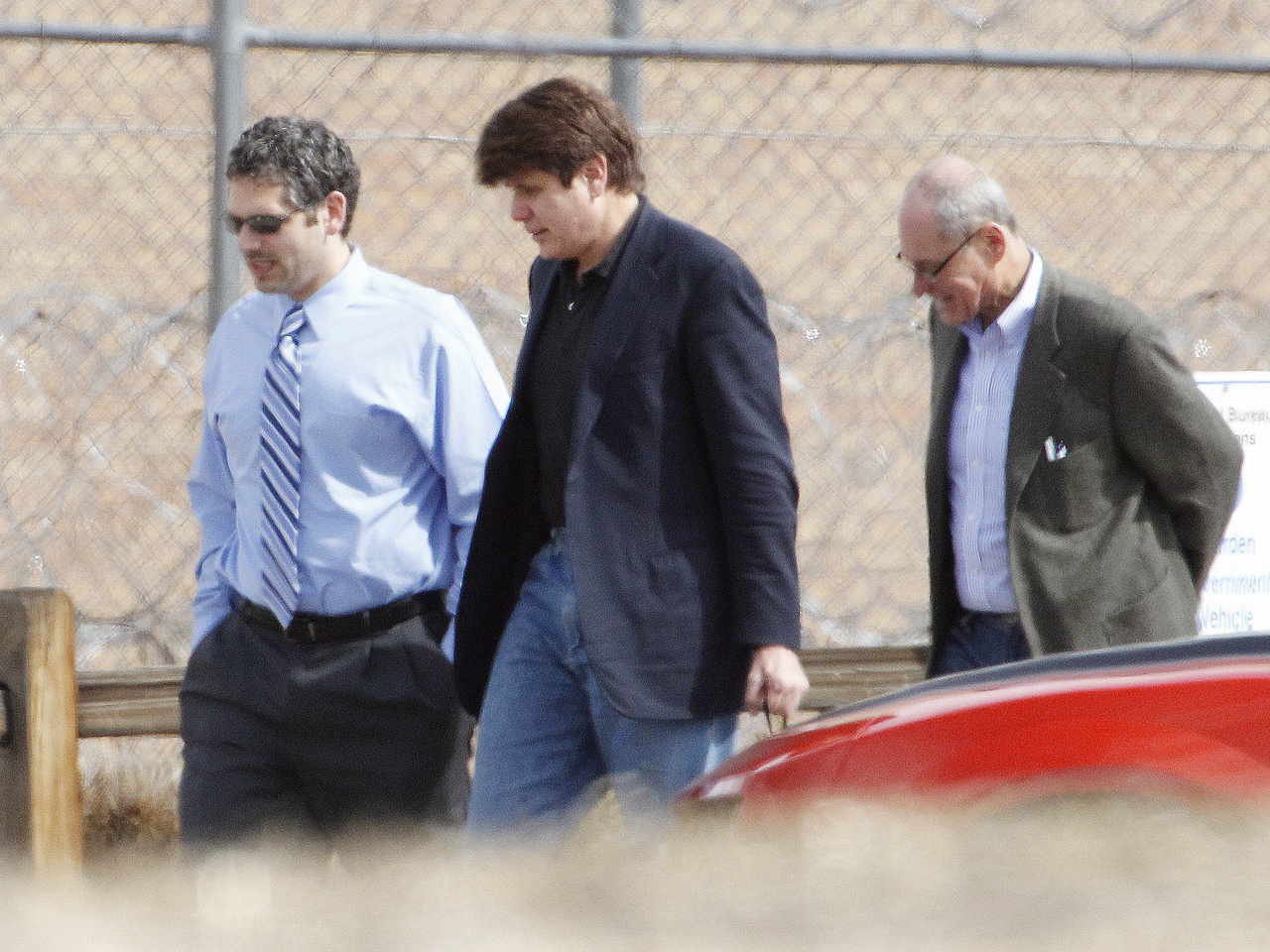 LITTLETON, Colo. - Convicted former Illinois Gov. Rod Blagojevich entered a federal prison in Colorado on Thursday to begin a 14-year sentence for corruption, the latest chapter in the downfall of a charismatic politician that seemed more like a bizarre reality TV show than a legal battle.

Followed by helicopters and television news crews broadcasting his every move, the 55-year-old Democrat pulled up in a black SUV at the Federal Correctional Institution Englewood in suburban Denver just before 1 p.m. after stopping for lunch and taking a break to make a cellphone call.

"I think it's kind of surreal to him, but he seems in good spirits," said Brian Pyle, who owns the Freddy's Frozen Custard and Steakburgers in Littleton where Blogojevich had lunch with three other people.

Pyle said he shook the former governor's hand as he left and told him, "stay strong." He said Blagojevich thanked him.

In what has become a familiar scene in the three years since Blagojevich was arrested at his home three years ago, the former governor bounded down the stairs of his Chicago house as a throng of cameramen, photographers and reporters crushed around him and well-wishers shouted encouragement.

Blagojevich sounded an optimistic and even defiant note, as he has done repeatedly before and after he was convicted on several corruption charges that included attempting to sell or trade an appointment to President Barack Obama's vacated Senate seat.

"I'm leaving with a heavy heart, a clear conscience and I have high, high hopes for the future," said Blagojevich, wearing a dark shirt, sport coat and blue jeans.

Blagojevich was not accompanied Thursday by his wife, Patti, who wiped away tears the night before as he addressed the media. She and the couple's two daughters did not step out of the house in the morning, though she could be seen through the windows and one of the two girls peeked out a window from time to time before her father departed.

"Saying goodbye is the hardest thing I've ever had to do," Blagojevich said.

Prison-bound Blagojevich: "I will see you around"
On last day free, Blagojevich offers last word
Blagojevich gets extra month of freedom, puppy

The helicopter-mounted TV cameras and crews following Blagojevich to Chicago's O'Hare International Airport brought to mind the low-speed chase of O.J. Simpson. A mob of travelers took photographs on their cellphones as Blagojevich, his arms raised, stood in a body scanner before heading to down the concourse.

He stepped off a plane less than three hours later at Denver International Airport, where local media reported he got in a car waiting for him at the airport gate.

Once inside the prison, experts said, Blagojevich must undergo a full-body strip search and hand over his personal belongings, save for his wedding ring. The man with a taste for fine Oxxford-label suits was to be given khaki prison garb and boots.

Jurors convicted Blagojevich on 18 counts after hearing FBI wiretaps that revealed a foul-mouth Blagojevich describing the opportunity to exchange an appointment to Obama's old U.S. Senate seat for campaign cash or a top job as "f——— golden."

The famously talkative Democrat embraced the public spotlight one last time Wednesday evening, seeming to relish the attention of reporters' microphones and hovering television helicopters as he expressed faith he would successfully appeal his convictions. He claimed he always believed what he did while governor was legal.

"While my faith in things has sometimes been challenged, I still believe this is America, this is a country that is governed by the rule of law, that the truth ultimately will prevail," Blagojevich told the crowd outside his Chicago home. "As bad as it is, (this) is the beginning of another part of a long and hard journey that will only get worse before it gets better, but ... this is not over."

Although a minimum-security facility, his new home looks every bit a prison: stone buildings are institutional beige, the grounds encircled by high razor-wire fencing. Blagojevich, who left behind his wife and daughters in the family's spacious Chicago home, will share a cell the size of a large, walk-in closet with up to three inmates.

The prison has a few other high-profile inmates, including Jeff Skilling, the former CEO and president of Enron who is serving a 24-year sentence for fraud and other crimes. But most of the facility's nearly 1,000 inmates are there for drug offences, and some could be in for violent crimes including murder, said U.S. Bureau of Prisons spokesman Chris Burke.

Inside, Blagojevich's life will be strictly regimented. The ex-governor — who was heard on the FBI wiretaps scoffing at the idea of earning a low six-figure salary — will work a menial prison job, possibly cleaning bathrooms or doing landscape work, starting at 12 cents an hour.

Guards take a half dozen head counts a day, including several overnight, and Blagojevich will be told what to do rather than give orders to sycophant aides, as he did while Illinois' top executive.

"He's going to be doing a lot of, `yes sir' and `no sir,"' said Jim Laski, a former Chicago city clerk sentenced to two years in prison for corruption in 2006. "It's a humbling, humiliating experience. But you have to take it."

Blagojevich's fame outside won't do him any good inside, explained Jim Marcus, a Chicago-based defense attorney and former prosecutor.

"You say you were once the governor of Illinois — no one gives hoot," Marcus said. "Prisoners are going to say, `You're in the same boat as me, pal. Now go clean the toilets."'

Perhaps some good news for Blagojevich is that he won't have to shave off his trademark thick hair, though maintenance may pose challenges. Hair dryers, for instance, are prohibited.

To cope in prison, ex-cons say, Blagojevich must master unwritten prison codes. Among them: Never gaze at other inmates for longer than a second or two, least they take the stares as a sign of aggression.

But the most difficult change undoubtedly will be living without Patti and their daughters, 15-year-old Amy and 8-year-old Anne. In prison, his contact with them will be limited to a few times a month and, when they do see each other, Blagojevich will be able to hug and kiss them once at the start of the visit and once at the end.

On all the other days he'll have another fight: boredom.

Under federal rules, inmates must serve at least 85 percent of their terms before becoming eligible for early release. That's nearly 12 years for Blagojevich, though his term could be reduced if he successfully enters a substance-abuse rehabilitation program, which his lawyers requested and the sentencing judge recommended without explanation.

He could read or play pool in a game room. The avid runner could jog, but only on a prison track for the limited time he's allow into the main yard. Internet access is prohibited, as are cellphones.

A law graduate, he could head to the prison library to research his case. He and his attorney are appealing both the 14-year sentence and his convictions.

"After the initial fear of the first days, boredom is the main enemy," said Marcus, the defense attorney. "Getting up at the same time, eating, working, sleeping at the same time ... that's what gets to so many inmates, and Blagojevich is in for such a long time."