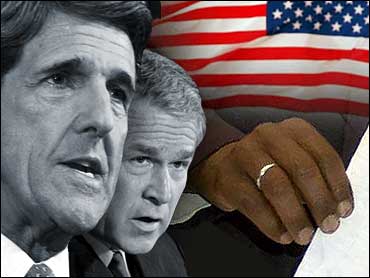 
With expectations of a record African American turnout on Nov. 2, voter trends suggest that if John Kerry wins the White House it will be in large part due to overwhelming support among black voters.

However, if African Americans turn out at levels equivalent to previous elections or are offset by drastic shifts in outside voter trends, President Bush is likely to earn four more years.

In an interview, Rev. Jesse Jackson says it point blank: "The black vote is the swing vote."

And, as Jackson knows, Kerry cannot win the presidency unless the black vote swings heavily in his favor.

Four years ago, African Americans turned out as never before. Nine out of ten went for Al Gore, making up 18.9 percent of all those who voted for the Democratic nominee. Comparatively, the black vote made up 15.4 percent of former President Clinton's support in 1996. In 1992, 17.1 percent of the voters who cast ballots for Mr. Clinton were African Americans.

Though Lyndon Johnson won a higher percentage (94 percent) of the black vote for the Democrats in 1964, African Americans made up a far smaller portion of the electorate then.

"There is every indication there is going to be a good turnout and that breaks in the Democrats favor," says David Bositis, an expert on African American politics at the Joint Center for Political and Economic Studies. "There will be a significant increase in black turnout and those new black voters are going to vote overwhelmingly for Kerry."

And in the same way that Republicans benefit from a high turnout among evangelical whites, more African Americans at the polls increases the Democrats chances.

"Do I think he is going to get the same percentage as Al Gore? No. Gore ran in some respects at the best point in history for African Americans," Bositis explains. "African Americans were doing incredibly well."

Strictly by the numbers, blacks' lives were improving at a better rate than whites' near the end of the Clinton era. From 1996 to 2000, African Americans saw record low unemployment and record high home ownership. Black household income raised $5,000 while white household income increased $4,000.

But Bositis emphasizes that the black bond to the Democratic Party was more than fiscal.

"They totally rallied to the Clinton administration when Republicans tried to impeach Clinton," he says. "Probably never before in history were the ties between African Americans and the Democratic Party's top candidates as strong."

If the Democratic primaries are any indication, Kerry has little to worry about. In multiple states, he exceeded Mr. Clinton's turnout among blacks. In Florida alone, Kerry earned 81 percent of the black vote versus Mr. Clinton's 74 percent in 1992.

If Bositis must hazard an educated guess, he expects 87 percent of black voters to support Kerry nationwide. He says President Bush will make inroads with African Americans because he cannot do any worse.

"George Bush will get a higher share of the black vote than he did in 2000 because he was at the total bottom," Bositis says. "The only people who voted for him were the most totally and completely hard-core black Republican voters."

Bositis' group, the Joint Center for Political and Economic Studies, released a poll this week that at first blush was encouraging for President Bush. The survey of 850 black voters found 69 percent favored Kerry, while 18 percent supported Mr. Bush. But Bositis emphasizes that the poll did not hedge for likely or registered voters. The survey was not intended to predict black voter support, Bositis says.

Still, 86 percent of those questioned in 2000 by the same survey viewed Gore favorably while only 78 percent had the same view of Kerry. But, Bositis insists, this is more a reflection that, "Gore had been vice president for eight years and he was Clinton's vice president."

If black turnout reaches a record portion of the electorate, as trends indicate it may, it could prove vital to a Kerry victory. From voter drives to church rallies, African Americans concentrated in key swing state's central cities – Milwaukee, Philadelphia, Cleveland, Miami – are galvanized.

And if President Bush wants to win African American voters, he isn't showing it. In July, he failed to appear before the NAACP national convention. Though he spoke to the Urban League, the NAACP brush off was taken as a sign that the president didn't appreciate the potentially hostile audience.

In 2000, Mr. Bush spoke at the NAACP convention but he has declined all invitations since taking office. NAACP officials claimed he was the first president since the 1930s to skip the annual gathering.

More recently, on Wednesday, it was announced that Mr. Bush had declined an offer to appear on Black Entertainment Television.

"From his perspective, it wasn't a mistake," Bositis conjectures. "[President Bush] is very awkward when not in very controlled and favorable circumstances, and he gets very rattled if people don't accept him on his own terms."

Comparatively, only lately has Kerry had any African Americans holding senior positions in his campaign. Jesse Jackson was recently named an adviser.

But Jackson sees this as inside political baseball. The onetime presidential candidate's "biggest concern" is that black voters will be disenfranchised.

"Black votes have been targeted." Jackson asserts. "In 2000, 2.1 million votes were disenfranchised, 1 million were black."

One factor with less than two weeks until Election Day is whether African Americans will close the turnout gap. For example, 100,000 registered black voters didn't turn out in Ohio four years ago.

The Census Bureau tracks white turnout in 2000 at 60 percent and black turnout at 54 percent.

"What I think is going to happen is that black turnout is going to approach a lot closer to white turnout than in 2000. That's because there has been an effort made to register and mobilize black voters." Bositis says.