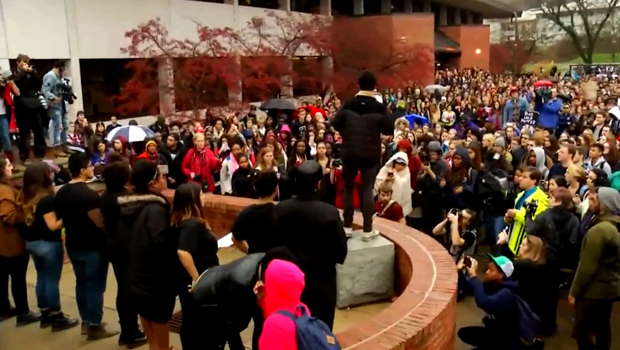 BOSTON -- Sheryce Holloway is tired of white people at Virginia Commonwealth University asking if they can touch her hair or if she knows the latest dance move.

The two black students chalk it up to the color of their skin.

Both were among thousands of students across the country who took part in demonstrations at college campuses Thursday to show solidarity with protesters at the University of Missouri, and to shine a light on what they say are racial problems at their own schools.

From Boston College to campuses at the University of California, dozens of schools saw walkouts and rallies.

While the protests that toppled the Missouri president were triggered in large part by complaints about slurs and other overt racism on campus, some students at Thursday's rallies said it's a subtler brand of prejudice that motivated them to take a stand.

Many said they face daily instances of casual racism and insensitivity. There's even a word on campuses these days for subtle slights against minorities: microaggression.

"It's more the daily microaggressions than the large situations," said Akosua Opokua-Achampong, a sophomore at Boston College. "Those also hurt."

Katiana Roc said she will never forget the day two years ago when she sat down in class at West Virginia University and a white student a few seats away collected his things and moved across the room.

"He looked uncomfortable. I'm pretty sure he moved because of the color of my skin. It didn't hurt my feelings," said Roc, now a junior. "What disappointed me was his ignorance."

She added that just being on campus can be a day-to-day struggle.

"But instead of me saying that I'll transfer where I feel more comfortable, I'd rather stick it out here," she said. "I'm not here for how people look at me; I'm here for my education."

Stories like that aren't new, students said. But many said the revolt at Missouri has driven them to talk about it and confront it.

In recent days and weeks, students at some colleges have presented administrators with their own demands, inspired by those of the protesters at Missouri.

Often, the demands call for greater diversity on the faculty, more spending on scholarships for minorities, more instruction on tolerance and sensitivity, and more resources such as cultural centers.

Universities have responded by hosting diversity forums in recent days, or meeting to hear demands.

Students at some schools, such as the University of Michigan, said the Missouri case has emboldened them to take a harder stance against administrators if they don't keep their promises.

On Wednesday, more than a thousand students at Ithaca College in upstate New York took part in a rally and walkout, CBS affiliate WTVH reported.

Tensions at Ithaca flared last month when students said a prominent alumni made racially insensitive remarks about a fellow alumna while the two spoke on a panel at a campus event.

Students said they were shocked when administrators did nothing to interrupt or address the remarks, which they claim were repeated numerous times during the event.

Instead, Ithaca president Thomas Rochon released a statement four days after the remarks were made, telling students, "The college cannot prevent the use of hurtful language on campus. Such language, intentional or unintentional, exists in the world and will seep into our community. We can't promise that the college will never host a speaker who could say something racist, homophobic, misogynistic, or otherwise disrespectful."

Students called the reaction too little, too late and called for Rochon to resign. Rochon created a new position of chief diversity officer on Wednesday, but the protests continued.

Holloway, from Virginia Commonwealth, said she has sometimes tried to ignore subtler instances of racism. But now, she said, she has decided not to keep quiet anymore.

"It's hard when it's something you see every day," she said. "It's exhausting. It's fatiguing and, you know, we're frustrated."