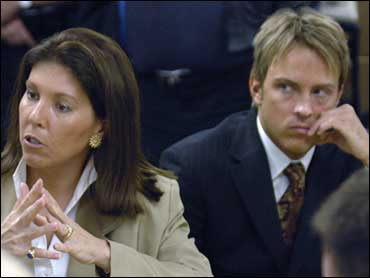 Larry Birkhead, the father of Anna Nicole Smith's baby, has countersued his former attorney, claiming she defrauded him out of hundreds of thousands of dollars.

The lawsuit filed Friday in Superior Court claims Debra Opri offered to represent Birkhead for free during a paternity dispute involving the baby because the publicity would benefit her career. Birkhead's lawsuit was filed just days after Opri filed her own suit claiming that Birkhead didn't pay his bills for her legal services.

Birkhead's lawsuit accuses Opri of depositing at least $865,000 owed to him for an unnamed project into an attorney client trust account against his wishes. After Opri refused to turn over the money, Birkhead fired her, the lawsuit said.

"Opri placed her own career desires and needs as a priority over the needs, interests and desires of her own client," the lawsuit said.

The lawsuit said Opri solicited donations to a legal fund and revealed confidential information during media interviews, all without Birkhead's consent. Opri is also accused of charging Birkhead for her travel expenses, dinners with friends and entertainment expenses.

In a statement released Friday, Opri said her former client was avoiding the issue of his unpaid legal fees.

"He has now admitted, however, that he can pay his legal bills having received over $1 million in a media deal," she wrote. "This does not include the untold millions he has received for selling photos of his daughter."

Opri has said she spent hundreds of hours working on Birkhead's behalf and had to travel to multiple states and outside the country. Her lawsuit did not specify a dollar amount.

Birkhead sued Smith in October seeking a paternity test of her daughter, Dannielynn Hope, to determine who was the baby's father.

Howard K. Stern, Smith's longtime companion and attorney, had also claimed to be the father and was listed on the baby's birth certificate.

A Los Angeles judge ruled in Birkhead's favor in December, but the DNA testing was not performed until months later. Smith died in Florida on Feb. 8 of an accidental overdose of prescription drugs.

Paternity tests released in April revealed that Birkhead was the baby's father.