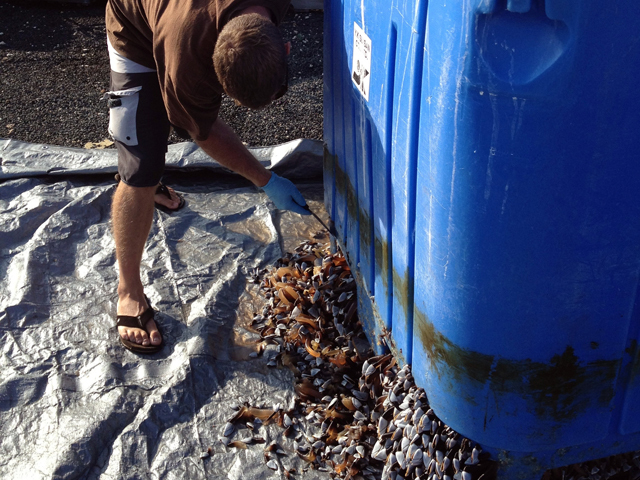 Japanese consular officials confirmed that the blue bin found earlier this week floating in the ocean is from Fukushima, said Ben Sherman, a NOAA spokesman in Washington, D.C.

It's the 12th confirmed piece to hit U.S. or Canada waters, he said.

The bin was spotted off Waimanalo, on the southeast coast of Oahu, by Makai Ocean Engineering staff and was retrieved by the Hawaii Undersea Research Laboratory. Used for transporting seafood, the 4-by-4-foot cube bears the name Y.K. Suisan Co. Ltd., the state Department of Land and Natural Resources said.

Nikolai Maximenko, a University of Hawaii researcher and ocean currents expert who is studying the trajectory of the tsunami debris, said the bin's arrival is consistent with his predictions for when the first pieces would get to Hawaii.

"It came at the right time, according to our model," he said. "But in some sense, it could just be a coincidence."

One million to 2 million tons of debris remain in the ocean, but only 1 to 5 percent of that could reach American and Canadian shorelines, Maximenko has said.

Crabs and barnacles were found on the bin, the state said, along with five local seabirds. Two flew away and three were found dead inside the bin. There were no foreign plant or animal species in or on the bin, which state officials put in quarantine.

Meanwhile, Hawaii fishermen spotted a large dock drifting toward Oahu that may also be tsunami debris. A Maui fisherman climbed on the dock and saw Japanese writing. The 30-feet by 50-feet dock was spotted Wednesday off Molokai, heading toward Oahu.

The Coast Guard was notifying mariners of the debris.