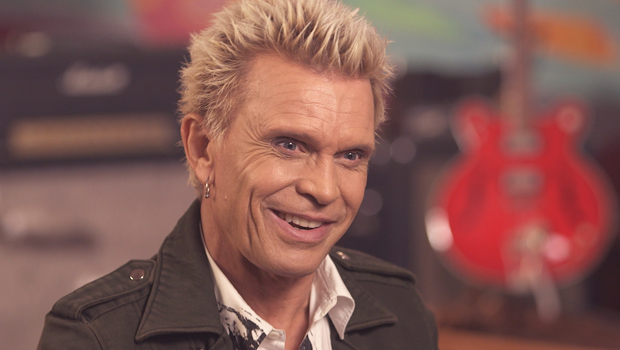 In a perfectly generic building, on an ordinary street somewhere in Los Angeles, Billy Idol is getting ready for a new U.S. tour.

And, at a fit 58, he still looks pretty much like the bad boy rocker you watched on MTV.

In the 1980s, few stars burned brighter -- or hotter. With that swagger and that hair, Bill Idol -- whose hits included "Dancing With Myself" and "White Wedding" -- was practically made for TV.

There is also, Smith said, his "trademark sneer, I guess is the best way to put it. Where did that come from? Is that just you?"

"Yeah. I think it's just my attitude," Idol said. "You have to have one hell of an attitude to get anywhere in the music business, or the world we came from."

And with one of his videos running just about every hour, he quickly became a megastar on MTV and beyond.

A highly successful child: Thoughout his career, he's had 16 songs in the top 40.

Not all of them were original Billy Idol tunes: He didn't write the wildly popular hit, "Mony Mony." But then again, Billy Idol isn't even his real name.

Billy Idol's childhood looked pretty much like anyone else's: he went to church with his parents, suited up for snow days, fell in step with the Cub Scouts. But as a teen he was obsessed with music, and when he announced that he was quitting college to join a rock band, his parents hit the roof.

"They wanted security for you," said Smith.

"But you wanted punk rock?"

"Yeah, we wanted to dream, wanted to have fun, wanted something more glamorous than my dad's power tool business that he wanted me to join him in," said Idol. "And he was a great salesman, fantastic, actually. But I always thought to myself, 'The only weakness he's got is, he's selling a product that's not himself.

"So I'm still a bit of the salesman he is, really. But I managed to work out I could make my own product, and there's a power in that, you know?"

Young Billy Broad followed his instincts, and his heart, and in the mid-'70s helped form the successful punk band Generation X.

Inspired by a teacher who once labeled him I-D-L-E, he changed his last name to I-D-O-L. Before long, the new name would fit him perfectly.

By the 1980s he was on his own, racking up the hits -- and the excesses of stardom. His womanizing is the stuff of legend.

"You've had one steady relationship at least through all of this," said Smith.

He had other appetites as well. When he lived in New York, his neighborhood in the East Village was at times an open-air drug market.

"I did have some moments in Washington Square Park," he said. "I used to walk through here. And the drug dealers who used to be here used to call their drugs by -- they saw me comin,' they'd say, 'It's Rebel Yell Heroin.' 'It's White Wedding Crack.' 'It's Dancing With Myself Marijuana,' or something. But I actually did get caught here on a police sting when I was a bit addicted to crack for a while, to coke."

More trouble followed: He nearly lost a leg in a motorcycle wreck in 1990; and in 1994 Idol OD'd outside an L.A. nightclub.

By then, he was the father of two children, so he cleaned up his act . . . or tried, anyway.

Smith asked him, "So are you sober now?"


"How does that work for you?"

"I don't know, really. Shouldn't work, really! But it's just, if I say to myself, 'I'm never doing anything again,' I'll immediately go and do it. That's what I'm like. So I have to sort of say, 'No, man, you can do whatever you want,' but there's a side to me saying, 'But we're not going to.' I like smoking pot. I still smoke tons of pot."

"I try -- I don't do coke, or any heroin or anything like that anymore."

"A little tiny bit. I drink a little bit. I like to drink with a meal at a restaurant, you know, but nothing else. I try not to. I wanna be here enjoying today. I don't wanna be brain-dead, and that could happen, too."

These days, he still has the swagger and trademark sneer . . . and something his fans might not have seen before: gratitude.

"Life is sweet," he said. "Why? Because I've got an audience, and the audience enjoys what I do and they tell me, and I have to say it back to them, 'Thank you for making my life so really great.'"

The man who defied his parents 40 years ago is still a rebel at heart. But they've long since made their peace, and before Bill Broad Sr. passed away in August, his son Billy went home to say goodbye.

"My dad was very much in the last stages of cancer, and was having trouble getting up the stairs or even doing simple things like putting his pajamas on, or brushing his teeth," said Idol. "You'd have to help him with all of that, 'cause he was getting so weak.

"And one night I put him to bed, and he got quite emotional and he sort of said to me, 'You know, Billy, did it upset you that I didn't really understand about you choosing music as a career?' And you know, I thought about that for a couple of seconds and I turned to him and I said, 'Dad, I was crazy to do it!' And I was crazy to do it."

But for Billy Idol, crazy seems to work.


WEB EXCLUSIVE: Read an excerpt from Billy Idol's new autobiography, "Dancing With Myself"