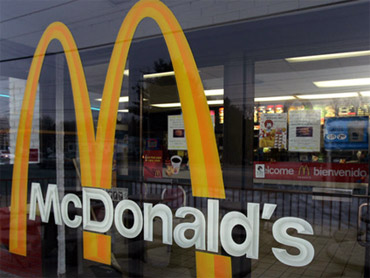 McDonald's frappes, smoothies and dollar menu drew in the highest customer count in more than two decades to push the world's largest burger chain's net income up 10 percent in the third quarter.

Results beat estimates and shares rose early Thursday to an all-time high of $79.48.

The quarter continues a long streak of outperforming competitors such as Wendy's and Burger King with rollouts of new products, including Angus snack wraps, smoothies and frappes, which McDonald's introduced this summer. The new menu items have kept diners returning and spending as the economic downturn dampens their appetite for meals out. Investors like what they see, sending shares up some 26 percent so far this year.

CEO Jim Skinner said those smoothies and frappes helped the company achieve its highest customer count in more than 20 years, though he didn't provide specifics. The chain plans to come out with new products next year, including oatmeal available all day.

The company, based in Oak Brook, Ill., is also using limited-time products to drive sales. The company plans to roll out its McRib sandwich on a national basis next month, something it said it hasn't done in years.

New drinks have been keeping people's interest because they're typically low-cost, just a few dollars, but have high profit margins, customers can easily grab them on the go.

"It's just something new and often that consumers demand, and we've seen beverages become a larger part of restaurant menus in the last several years," said Morningstar senior analyst R.J. Hottovy. "McDonald's has been at the forefront of that movement."

The smoothies and frappes also help increase profits because they cost more than a fountain beverage, and that's key to the company's strategy too, said Don Thompson, president and chief operating officer. It's crucial for a company that draws people in with dollar menu items to have a high-profit item to sell with them.

"What they allow us to do is to be able to afford to execute our value platforms. That's really the biggest goal that we have in economic downturns, protect and grow the guest counts, which yield us high levels of profitability," Thompson told investors on a conference call.
— — For the three months ending Sept. 30, McDonald's earned $1.39 billion, or $1.29 per share, up from $1.26 billion or $1.15 per share last year.

Analysts expected the company to earn $1.25 per share on revenue of $6.23 billion, according to Thomson Reuters.

Revenue at stores around the world open at least 13 months rose 6 percent, led by 8.1 percent growth in Africa, Asia/Pacific and the Middle East. In the U.S. the figure rose 5.3 percent, while in Europe it rose 4.1 percent.

The figure is important for restaurants because it measures growth at existing locations rather than newly opened ones.

The company said in Europe, results were helped by expanded hours and updated restaurants. In the U.S. people continued to respond well to new drink options and value menu. Expanded hours are also part of the domestic strategy to expand sales. Some 40 percent of the company's restaurants are now open 24 hours and more than 80 percent are open by 5 am.

In other parts of the world, the same focus on value coupled with limited-time menu items drew in customers.

Skinner said the company expects revenue at locations open at least 13 months to grow between 5 percent and 6 percent in October.

Baird analyst David Tarantino said he had expected the figure to rise 4 percent to 5 percent this month, so the company's higher estimate was positive. He calculated that in September, revenue at stores open at least 13 months rose 6.1 percent around the world, and 5.7 percent in the U.S.

The company is slowing its remodeling of company-owned restaurants so it can test various redesigns, keep an eye on costs and measure the effect on sales. It had planned to remodel between 400 and 500 locations in the U.S. this year but that will now be around 225 instead. Next year the chain plans to remodel 600.

"We really have one chance to do this right and we're going to do it," said CFO Pete Bensen.