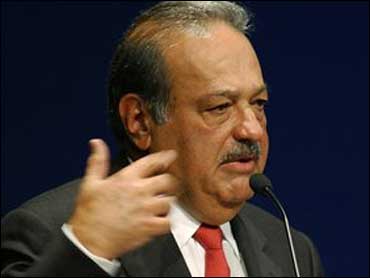 The world's third-richest man, Mexican telecom magnate Carlos Slim, poked gentle fun at the philanthropy of Bill Gates and Warren Buffett, and said businessmen can do more good by building solid companies than by "going around like Santa Claus" donating money.

Slim on Monday announced a new $450 million foundation for health research and care, a minor slice of his estimated $49 billion fortune.

But Slim said he had no interest in competing with U.S. tycoons Gates and Buffett, who lead him on the Forbes magazine's list of the world's richest people and have donated much larger shares of their fortunes. Slim is gaining rapidly on the two heavyweights with a fortune that grew by $19 billion last year, the largest wealth gain in the past decade tracked by Forbes.

"Our concept is more to accomplish and solve things, rather than giving; that is, not going around like Santa Claus," said Slim, as he cracked jokes, smoked a cigar and outlined business plans at one of his rare news conferences. "Poverty isn't solved with donations."

"I think that what Gates has done is good, and above all, because he said he would devote full time to this, and half time to Microsoft, which makes time-and-a-half," Slim quipped.

Slim showed himself as an unrepentant businessman driven by "the taste for competition." He said his own charitable foundations have $4 billion in endowments, but he waxed ironic about Buffet's decision to give way his fortune over the next 20 years.

"It's very interesting, because he leaves those who are running his affairs the responsibility of being very profitable," Slim said. "If they're inefficient, or don't get real-term returns, they're not going to be running anything."

Microsoft founder Gates, who set up the world's richest charity foundation, has said he believes "that with great wealth comes great responsibility, a responsibility to give back to society."

Buffett, chairman of Berkshire Hathaway Inc., agreed with that sentiment last year when he said he would send about $1.5 billion every year to the Bill & Melinda Gates Foundation, which has an endowment of $33 billion.

For Slim, business is a calling, and pretty much the cure for all ills.

For example, he proposed that the United States transfer large amounts of Medicare patients to huge hospitals that could be built in northern Mexico, where health care costs would be lower.

True to his style, Slim seldom proposes a plan he does not have a business interest in — his construction company helps finance hospital projects. He said he wants to join a plan to distribute low-cost computers to the poor, but it is unclear if that would involve his chain of computer stores.

His fortune has caused resentment in a country where the minimum wage is about 50 cents per hour. Many in Mexico claim Slim's huge fortune comes from charging high prices in Mexico's fixed-line telephone market, where his Telmex company holds a near-monopoly.

He also acknowledged the 1991 privatization sale in which he bought a controlling stake in Telmex "could have been better" managed by the government. He said Spanish officials once tried to arrange a merger between Telmex and Spain's Telefonica, its main competitor.

To Mexicans, who make Slim richer with nearly every phone call or trip to the mall, his stunning rise illustrates that Mexican businessmen can run world-class companies. But it also inspires anger at Mexico's monopoly-heavy economy, which concentrates wealth in the hands of a relatively tiny elite.

"Why should we want a few people to hoard all the wealth, if the majority of Mexicans don't have enough to eat and 30 million Mexicans live on less than 22 pesos ($2) per day?" thundered former leftist presidential candidate Andres Manuel Lopez Obrador after Slim's dizzying rise was announced by Forbes magazine last week.

Latin American billionaires — there are 10 others in Mexico alone — do not have a record of charitable giving comparable to Buffett or Gates, and the region's tax laws often do not encourage it as much.

"It's not that there is a lack of good will, it's that it has been customary here to see social programs as the duty of the government," said Manuel Arango, a founder of the Mexican Center for Philanthropy.