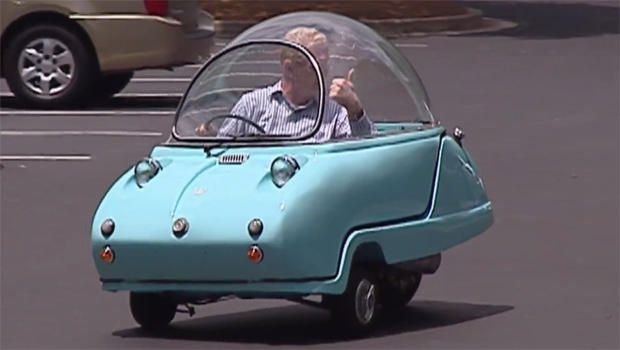 After 31 years with "Sunday Morning," Bill Geist is making it official: he's retiring, with our thanks, admiration, and affection – but not before he takes us down his own personal memory lane:

Over the past 31 years we've become quite close, you and I.

You've joined us for the holidays, like members of the family. We donned our holiday fashions … took our cats to have their Christmas photos taken with Santa … and made Christmas decorations, just like Martha!

But mainly, we've been on the road together, hitting major attractions, venturing far off the beaten path, for competitive stone skipping.

We went to the Four Corners, where Arizona, New Mexico, Utah, and Colorado meet.

Together we took a 5,600-mile cross-country RV trip.  And how could we pass up the opportunity to see Albert, the world's largest bull? Or the chance to taste the worst apple pie?

And there was our stop at a brothel in Pahrump, Nevada! My fantasy: to get the bugs off the windshield. $300 for them to scrub away, plus a $1.50 for Windex.

We've visited fine museums you may have missed in your own travels, and introduced you to American art nouveau, like a "Last Supper" made entirely of dryer lint.

And to cutting-edge artists. In Iowa we met Duffy Lyon, who sculpted in butter; and in Wisconsin we watched professional cow photographer Kathy DeBruin at work.

When critics say the media doesn't cover rural America, don't look at us. We've gone to skads of small towns!

How small? The sign at Monowi, Nebraska, boasted a population of 2! But they exaggerated. It was really just one, Elsie.

In Hanlontown, Iowa, we joined in as they celebrated the day the sun sets in the middle of the railroad tracks, and the rails glowed like molten steel.

When tragedy struck on September 11, together we grieved the loss of family and friends and neighbors in my hometown.

The town of Hendersonville, North Carolina, came together to send aging World War II veterans on free trips to Washington, D.C., to set eyes on the monument built to them for saving the world.

We were in Ketchum, Idaho, as the sheep came down from the mountains, through the town, as they do every year.

Along the way met people who pass the time with some odd hobbies, like collecting old washing machines, or toasters!

And while we're on the subject of appliances, remember the vacuum cleaner collectors?

In Fruita, Colorado, we celebrated Mike the Headless Chicken, who survived nearly two years without his noggin, and went on a nationwide tour.

In Nederland, Colorado, we paid tribute to a grandfather buried under a big pile of ice in a backyard shed, at Frozen Dead Guy Days.

America loves contests and competitions. Punkin Chunkin, in Lewes, Delaware, where contestants vied to see who can shoot pumpkins the farthest.

In Luling, Texas, it was who can eat watermelons the fastest. (Not me!) Beaver, Oklahoma, the Napa Valley of cow chips, held the World Cow Chip tossing Championship. Buda, Texas, where we saw thoroughbred weiner dogs at the races, with all their speed and grace. And who can forget figure eight school bus racing in Bithlo, Florida?

We were happy to introduce you to sports that have been slow to catch on, frankly – Donkey Basketball (a little-known fact: The Amish love donkey basketball!); extreme ironing; and in San Jose, Calif., underwater hockey.

Sure, we spent a lot of time on the road. But I can't complain. There was that night in a Wigwam motel, and in a hotel made of ice. (It's cool!)

And who can forget our romantic stay in a room with a giant champagne-glass tub?

And we traveled by every conceivable mode of transportation: Micro cars, that were cramped, yes, but no more searching for a parking spot at the supermarket.

And we took to the skies in Loyalton, California, where 93-year-old pilot and paperboy Hal Wright jump-started his old plane and took us along on his paper route. We delivered mail, too, by horseback, down the walls of the Grand Canyon.

And wherever we went, we sampled the local cuisine – road kill stew in Lawrence, Kansas; in Madison, Minnesota, Lutefiske (fish soaked in Lye). It's a wonder those people are still alive!

Not to mention the customers of this place: the Heart Attack Grill in Tempe, Arizona.

We went to State Fairs, where you can always find the latest breakthroughs in fatal foods. Who knew that "deep fat fried butter" was even possible?

Thanks for watching these past thousand or so Sundays. It's been my great pleasure.