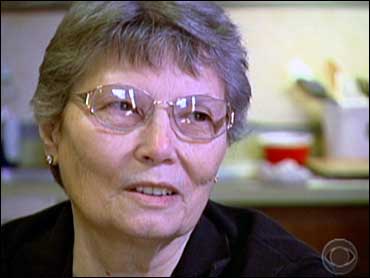 Ranchers and farmers come to Monowi, Neb. — population one — from miles around for a cup of coffee, lunch or dinner, or a beer. But mainly they stop for a chat.

"If I get that busy somebody else gets up and gets a beer and tends the bar and I tell 'em don't worry, I can count your empties," Elsie Eiler told Sunday Morning correspondent Bill Geist.

It's the core of the community. There might not even be a community without Elsie's place, The Old Tavern.

"Kind of a hub, I guess," she said. "A lot of people stopping in and leaving messages for each other, and to just pick up something and go on and sit and visit a minute."

Elsie's place is the beating heart of a dying town — part of a mass exodus from the Great Plains as family farms fade away. Once a bustling little town with a railroad stop, Elsie is all that remains of Monowi. It now has only one resident who serves as the mayor, the city clerk and the librarian.

She took Geist on a tour of the town and pointed out some of the now-abandoned landmarks.

"This was our church," she said as she showed Geist the old building. "My dad's funeral was the last funeral in 1960. There was another big house there, and another in behind those trees. Some of these were pretty nice houses."

She showed Geist where she met her husband: the old schoolhouse where she attended first through fourth grade.

"I taught one year of school there," she said.

She pointed out the old jailhouse which she said she might repair.

"But don't think I'll bother to arrest anybody," she said. "Then I'd probably have to feed 'em and haul the food up, so it isn't worth that."

"There's no need in worrying about what might have been or what happened in the past, really," she said.

The frontier that closed a century ago is re-opening. A lot of wildlife has returned to the area. They've seen mountain lions, bobcats, elk and, of course, deer. It's kind of like people are moving out and nature's taking over. There was fear when Rudy died that Elsie would move away.

"I'd be lost without her," Rocky said. "I know one thing: I'd probably be out of business if she left."

Folks here don't even like it when she takes a few days off.

"When she goes on vacation to see her relatives, oh my, it seems like a long time before she gets back here," one woman said.

"Sure, I could move to the city where I'd have lots of acquaintances but here I have a lot of friends — all these people coming in," Elsie said.

In this remote area where cell phones don't work, Elsie does. The Old Tavern is a regular information nexus.

"My wife works in a nursing home so if the roads are bad and I want to make sure she's gotten to the highway, I call Elsie and tell her to let me know when Vi goes by," one regular customer said.

"Like this one guy does repair work, a lot of people will call here and say, 'If you see him if he shows up, tell him so-and-so's looking for him,'" Elsie said.

One of the people who benefit from Elsie's information center is Rocky, a welder who's always in demand.

"I come in here and before I get in the door, she'll holler at me, 'Well call home,' or so-and-so called wanting to know where you're at,'" Rocky said. "She'll relay the message to me — in other words, she's my secretary, my cook away from home. Another message coming in and she does this for everybody."

"If you want to know anything that's going on just ask her because someone's told her," another customer said.

"Somebody's probably told me, that's for sure," Elsie said. "That's what bartenders are: everybody tells you stuff — sometimes more than you want to know."

At the Old Tavern, people can post notices, advertisements, and family photos.

The tavern is also city hall, where the mayor must, by state law, draw up budgets. As the mayor of her town, she said Monowi spends about $500 a year.

She is also the city clerk, in charge of approving her own liquor license. Elsie is also responsible for infrastructure (like the new and improved outhouse), and to hold legally required public hearings. Essentially she holds hearings for herself and in theory could voice opposition to herself, if she wanted. Only people from the town are allowed to attend the hearing.

"Well, I thought everything was going OK, so I okayed it," she said.

In what has to be one of most optimistic civic projects in history, two years ago Elsie opened a new public library with 5,000 volumes. It was a dream of her late husband, Rudy, to turn his personal collection into a public library.

"He had lots of books. He read all the time and always wanted to get 'em in one spot," she said.

Even through her husband passed away more than three years ago, she has not replaced the sign that says "Monowi: Population 2."

She said she'll be there for the new sign. As long as Elsie sticks around, Monowi will too

"I'm not going anywhere," she said.