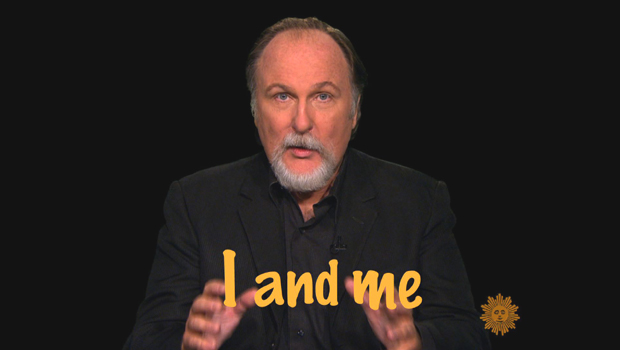 Time now for a public service announcement from our contributor and first-person-singular-pronoun policeman Bill Flanagan of VH1:

I know it sounds snobby to point this out, but in the last 10 or 15 years, millions of intelligent English-speaking people have become flummoxed by when to use "I," and when to use "me." You hear it all the time:

Are you coming to the movie with Madonna and I?
Won't you join Oprah and I for dinner?
The Trumps are throwing a party for Barack and I.

At least people who mess up the other way -- "Goober and me are going to town" -- sound folksy, colloquial, down-to-Earth. But people who say "I" when they should say "me" sound like they are trying to be sophisticated and they're getting it wrong.

Clearly our grade schools have let us down.  So for those of you who missed it the first time, here's the simple rule:

If you are writing or speaking a sentence with a list of names, including the first person pronoun, and you are not sure whether to say I or me, take out the other names. That will tell you.

"Are you going to the movie with Betty, Veronica and ...?"

"Me." Because you would not say, "Are you going to the movie with I?"

"Curly, Larry and who? are going to jail?"

Okay, that's all I wanted to say.  "I" and "me." Let's preserve that one small fragment of our civilization.

And don't get me started on people who mix up "stomach" and "belly." That's a lost cause.

Orecchiette: The art of pasta