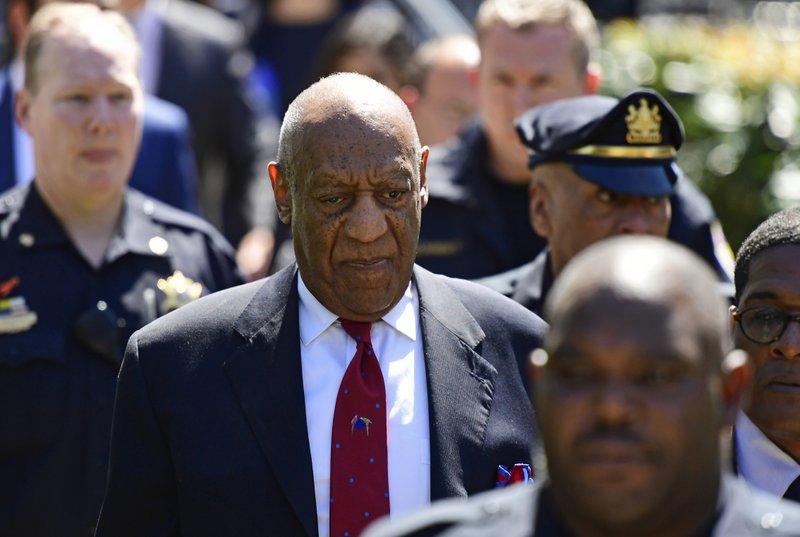 NORRISTOWN, Pa. -- Bill Cosby was convicted Thursday of drugging and molesting a woman in the first big celebrity trial of the #MeToo era, completing the spectacular late-life downfall of a comedian who broke racial barriers in Hollywood on his way to TV superstardom as America's Dad.

Cosby, 80, could end up spending his final years in prison after a jury concluded he sexually assaulted Temple University employee Andrea Constand at his suburban Philadelphia home in 2004. He claimed the encounter was consensual.

Cosby was convicted on three counts of felony indecent aggravated assault. He faces 10 years in prison on each count, but it's not clear whether any sentences imposed may run concurrently.

Speaking to the media with Constand standing by, district attorney Kevin Steele thanked the jury in an emotional statement. He called Constand "the most important person" in the case and hailed her courage for coming forward against a "powerful man."

Steele said Cosby "used his celebrity, his wealth, and his network of supporters to help him conceal his crimes" and said the verdict demonstrates "who the real Bill Cosby was."

Constand did not speak. Her attorney said that although "justice was delayed, it was not denied."

The jury at Cosby's first trial deliberated for more than 52 hours over six days last year without reaching a verdict.

The 80-year-old entertainer stared straight ahead as the verdict was read. Constand remained stoic. Shrieks erupted in the courtroom and some of his other accusers whimpered and cried.

Judge Steven O'Neill told the panel of seven men and five women that it was "an extraordinarily difficult case." He says the jurors "sacrificed in the service of justice."

Cosby stood up and erupted after jurors left the courtroom. He used an expletive to refer to Steele, who was arguing to revoke Cosby's bail.  Steele told the judge Cosby has a plane and might flee.

The judge decided Cosby can remain free on $1 million bail while he awaits sentencing, but restricted him to Montgomery County, where his home is. No sentencing date was set.

Cosby waved to the crowd outside the courthouse, got into an SUV and left without comment. His lawyer Tom Mesereau declared "the fight is not over" and said he will appeal.

Jurors in this trial began deliberating Wednesday in Norristown, Pennsylvania, after prosecutors in closing arguments portrayed the former TV star as a serial predator who drugged and molested Constand 14 years ago.

Five other women were called to the witness stand and testified the same thing had happened to them. Attorney Gloria Allred, who represents three of those women, said outside court that "justice has been done."

"Finally, we can say women are believed, not only on hashtag  #MeToo, but in a court of law," she said.

Allred said she was the "happiest I have been about any court decision in 42 years." She read statements from the three women she represents.

"I am overwhelmed with joy, relief and gratitude," said Allred, reading a statement from Janice Baker-Kinney. "Joy that finally justice has been served, relief that the years of this toxic chain of silence has been broken, and we can now move forward with our heads held high."

Cosby was ordered to surrender his passport and will remain out on bail until sentencing. A date hasn't yet been set. He was seen leaving the courthouse with his spokesman.

At trial, the defense had urged jurors to acquit, saying the charges were based on "flimsy, silly, ridiculous evidence." The defense called Cosby's accuser a "pathological liar" who was seeking a big payday.

Defense attorneys Tom Mesereau and Kathleen Bliss said in their closing argument that chief accuser Andrea Constand consented to sexual activity, then leveled false accusations against the "Cosby Show" star so she could sue him and extract a big settlement.

"You're dealing with a pathological liar, members of the jury," said Mesereau, who won an acquittal in Michael Jackson's 2005 child-molestation case. "You are."

Cosby's wife of 54 years looked on from the gallery as his lawyers pleaded with the jury to clear him, the first time she has attended the trial. Camille Cosby, 74, had stayed away as the prosecution built its case that her husband maintained a sordid double life, plying women with drugs and preying on them sexually.

Before the jury came in, she went to the defense table and put her arm around Cosby, who is legally blind. They embraced, smiled and chatted, and he gave her a peck on the cheek.

When it was the prosecution's turn to argue, Camille Cosby left the courtroom, and Constand entered.

Constand, 45, alleges Cosby knocked her out with three pills he called "your friends" and molested her in January 2004. Her account was bolstered by the testimony of five other women who took the stand and said Cosby had drugged and assaulted them, too -- including one woman who asked him through her tears, "You remember, don't you, Mr. Cosby?"

The defense ripped into the other accusers Tuesday, saying they were motivated by the prospect of money and fame to fabricate their accounts.

After last year's hung jury, the defense team also mounted a far more aggressive effort to stoke doubts about Constand's credibility and raise questions about whether Cosby's arrest was even legal.

Their star witness was Marguerite Jackson, a former Temple University colleague of Constand's who testified that Constand spoke of framing a high-profile person for the purpose of filing a lawsuit. Constand received nearly $3.4 million from Cosby over a decade ago -- a settlement that Mesereau argued was "one of the biggest highway robberies of all time."

Cosby has said he gave Constand 1½ tablets of the over-the-counter cold and allergy medicine Benadryl to help her relax before what he called a consensual encounter.

Feden, the prosecutor, bristled at what she called the defense's "horrible character assassination" of Constand and the other women.

She called Cosby the true con artist -- wresting that label from Cosby's lawyers, who had applied it to Constand throughout the two-week trial.

"Yes, you did hear about a con," Feden said, her voice rising as she moved toward Cosby and pointed at him. "The perpetrator of that con is this man, sitting right here."

She also called out Cosby for smirking during her presentation.

The defense highlighted more than a dozen inconsistencies in what Constand has said over the years.

Cosby's lawyers also painstakingly reviewed phone and travel records for Cosby and Constand, as well as a schedule for the Temple women's basketball team, saying they are proof the alleged assault couldn't have happened when she says it did. Prosecutors have noted that Cosby's travel records have large gaps in time.

In arguing over when Cosby's encounter with Constand took place, Cosby's lawyers sought to suggest that the comedian was charged after the 12-year statute of limitations for prosecuting him had run out.

Bliss argued that Cosby, once revered as America's Dad, was an innocent man caught up in the "emotion and anger" of the #MeToo movement against sexual misconduct. Cosby was arrested years before  #MeToo became a cultural force and took down famous men like Harvey Weinstein, Matt Lauer, Kevin Spacey and Sen. Al Franken.

Bliss also suggested that Constand and Cosby were having an affair, and that she was the aggressor, "cavorting around with a married man old enough to be her grandfather."

Wearing sunglasses in the courtroom, Cosby's wife smirked and pursed her lips a few times but otherwise listened stoically.

The Associated Press does not typically identify people who say they are victims of sexual assault unless they grant permission. Constand has done so.

Editor's note: A previous version of the video attached to the story has been edited & replaced for clarity.