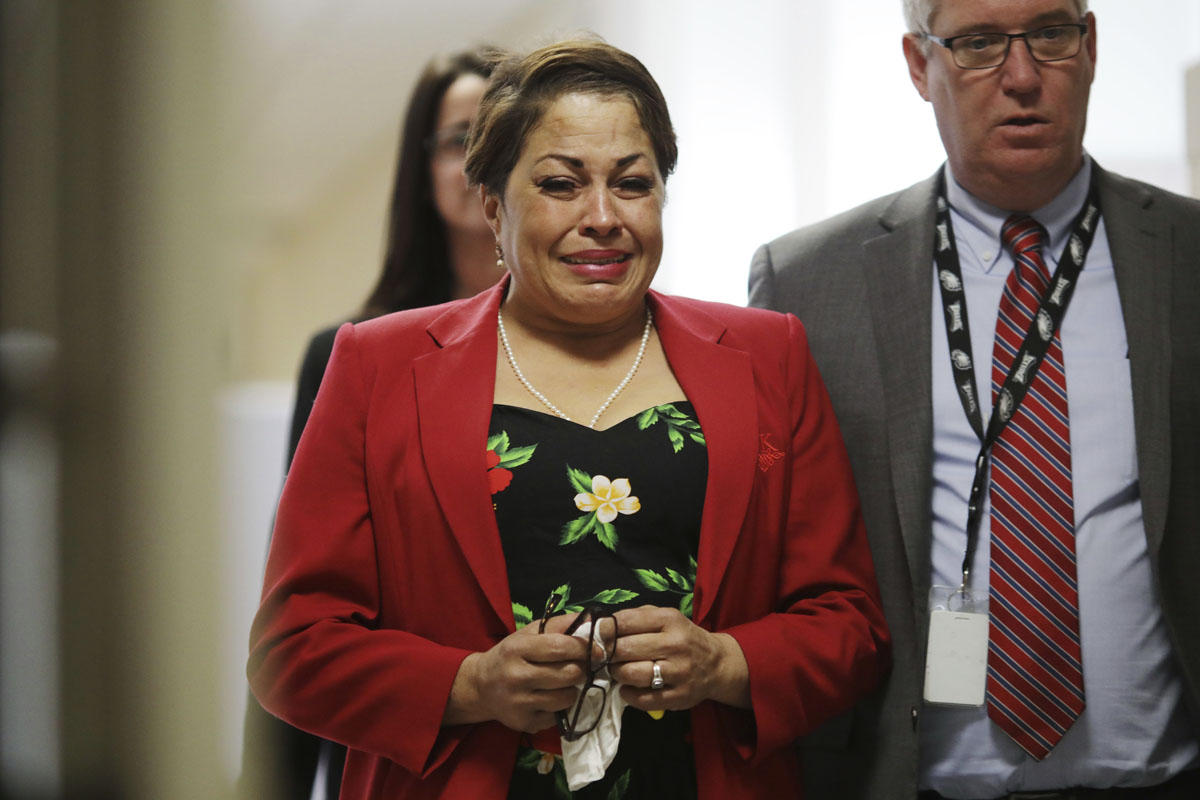 NORRISTOWN, Pa. -- The first accuser to testify at Bill Cosby's retrial described the comedian Wednesday as "a serial rapist" as she parried with his lawyers, while a second accuser tearfully confronted the comedian over a 32-year-old assault allegation: "You remember, don't you, Mr. Cosby?"

The courtroom dramatics prompted mistrial requests from Cosby's lawyers - which were denied - as prosecutors began putting on a parade of women who say Cosby drugged and molested them long before he met Andrea Constand, the chief accuser in his sexual assault retrial.

Sobbing uncontrollably as she testified, Chelan Lasha told jurors she got to know Cosby through a family connection as a 17-year-old aspiring model and actress. She met the star at a Las Vegas hotel in 1986 under the pretense that he had arranged a photo shoot for her.

She said Cosby gave her a little blue pill he described as an antihistamine to help her get over a cold, along with two shots of amaretto "to help break up the cough." The combination immobilized her and rendered her unable to speak. Cosby then assaulted her, touching her breast and rubbing himself against her leg, Lasha said.

"I could barely move. He guided me there, and he laid me in the bed. I couldn't move any more after that. He laid next to me, and he kept touching my breast and humping my leg. I remember something warm hitting my leg," she said.

Asked what was going through her mind, Lasha testified: "Dr. Huxtable wouldn't do this. Why are you doing this to me? You're supposed to help me be successful."

Turning to Cosby, she made the remark about him not recalling the encounter.

Cosby, who portrayed kindly Dr. Cliff Huxtable on his hit TV comedy "The Cosby Show," turned away and smiled slightly.

Seeking to portray Lasha as a chronic liar, Cosby's lawyers won permission from a judge to tell jurors about her 2007 guilty plea for filing a false police report in Arizona. The defense said the conviction "bears on her veracity."

Lasha and the other accuser who has testified so far, Heidi Thomas, are among five additional accusers whom prosecutors plan to call to make the case that Cosby, once revered as "America's Dad," was a Hollywood predator who is only now facing a reckoning after allegedly assaulting Constand at his suburban Philadelphia home in 2004.

The additional accusers could also help prosecutors insulate Constand from the defense's contention that she is a "con artist" who preyed on Cosby's vulnerability after the 1997 killing of his son, Ennis, and then framed him to score a big payday via a $3.4 million civil settlement.

The defense has urged jurors to ignore the other accusers, calling their allegations irrelevant to the charges involving Constand, who turned 45 on Wednesday.

Constand, a former Temple University women's basketball administrator, alleges Cosby gave her pills and then molested her. He says the encounter was consensual.

Cosby, 80, is charged with three counts of aggravated indecent assault, each punishable by up to 10 years in prison. His first trial last year ended in a hung jury.

As they began building their case against Cosby, prosecutors chose Thomas, a Colorado music teacher, as their first substantive witness.

In 1984, Thomas was a 24-year-old aspiring actress when her agent arranged for Cosby to give her acting tips at a session in Reno, Nevada. She testified that Cosby gave her wine as they rehearsed a scene in which she portrayed a drunken woman. She said the wine knocked her out, and Cosby then forced her to perform oral sex.

She said she remembered feeling sick and wondering, "How did I get here?"

Under cross examination Wednesday, Thomas rejected a defense lawyer's insinuation that she would do anything to help Constand.

"You've made it very clear that you want to help Andrea Constand, haven't you?" Kathleen Bliss asked.

"I want to see a serial rapist convicted," Thomas replied.

She told jurors she came forward with her allegations in early 2015 to support other women who have accused Cosby, not for the attention his lawyers say it brought her.

She added she once sent a Facebook message to Constand.

"I just wanted her to know that everything that was being said about her and about us, that there was somebody out there who knew she was telling the truth," Thomas testified.

Thomas said she chronicled her trip to Reno in a scrapbook and recorded a cassette tape at the home where she had the encounter with Cosby. She said she wanted to recount the trip for her mother and agent but destroyed it years later after seeing a psychiatrist.

It made no mention of the alleged assault, Thomas said, because she had planned to give it to her mom.

The Associated Press does not typically identify people who say they are victims of sexual assault unless they grant permission, which Constand, Lasha and Thomas have done.