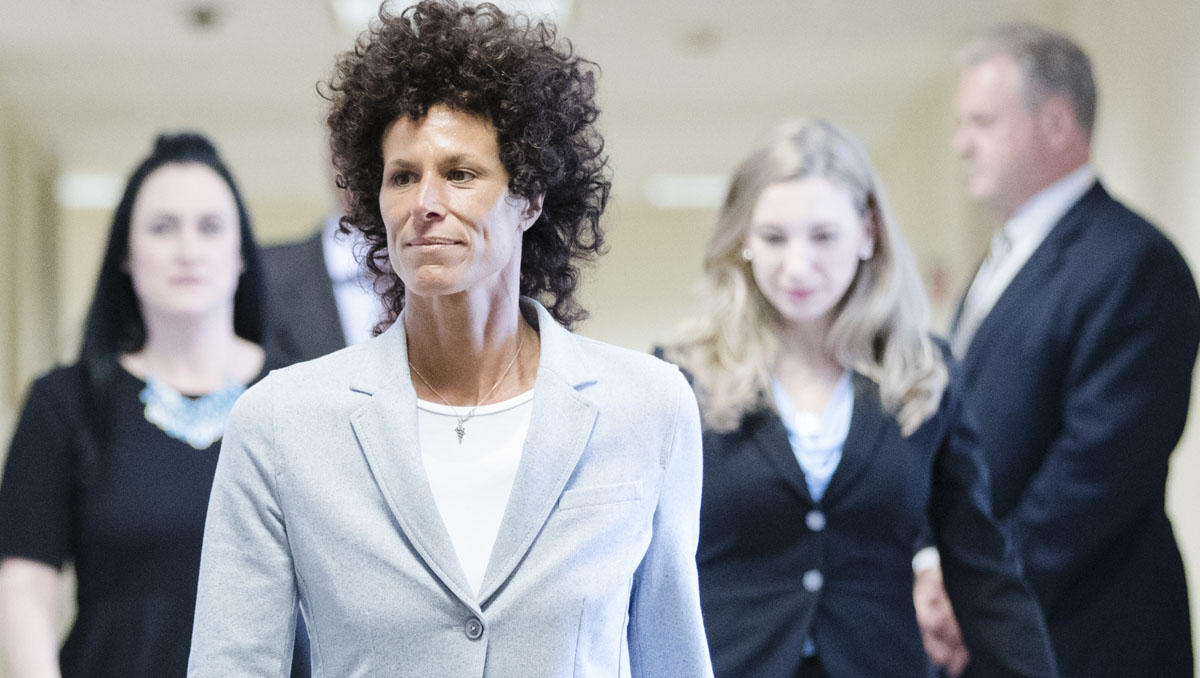 NORRISTOWN, Pa. -- Bill Cosby's chief accuser took the stand at his sexual assault trial Tuesday to tell her story publicly for the first time, saying the comedian groped her after giving her three blue pills that left her paralyzed and helpless.

"In my head, I was trying to get my hands to move or my legs to move, but I was frozen," Andrea Constand, a 44-year-old former employee of the basketball program at Temple University, Cosby's alma mater, said in their long-awaited courtroom confrontation. "I wasn't able to fight in any way."

Cosby, 79, is charged with drugging and violating Constand at his suburban Philadelphia home in 2004. The TV star once dubbed America's Dad could get 10 years in prison if convicted.

Constand said Cosby gave her pills he claimed were a natural remedy to ease her stress about a looming career change. "They're your friends. They'll take the edge off," she quoted him as saying.

She said she started feeling woozy after about 20 minutes, with blurred vision, slurred words and legs that felt like rubber. Cosby then penetrated her with his hand and also placed her hand on his penis and moved it back and forth, she said.

Cosby, sitting across the room at the defense table, leaned in to listen, whispered to his lawyer and, at times, shook his head.

Before Tuesday, Constand had never spoken about Cosby in public, barred from doing so under the terms of a confidential settlement they reached in 2006. Her deposition from that lawsuit remains sealed.

Some 60 women have come forward to say Cosby sexually violated them, all but destroying his nice-guy image on screen and off, but the statute of limitations for prosecution had run out in nearly every case. Constand's case is the only one in which Cosby has been charged.

Constand could face a bruising cross-examination from Cosby's lawyers, who have argued that the two had a romantic relationship, that she wasn't incapacitated and that the sexual encounter was consensual.

Constand was calm and collected as she testified, looking at the jury as she described the assault.

Constand, who is from the Toronto area, met Cosby while working for the women's basketball team at Temple, and she said they became friends over conversations about the team and later her career. He invited her to dine with him at his home.

Cosby was "somebody I trusted," Constand said. "A mentor."

But he had also previously made advances on her, she said. One time, he placed a hand on her thigh. Another time, she said, Cosby tried to undo her pants but took his hand away when she leaned forward and told him: "I'm not here for that. I don't want that."

Asked by a prosecutor why she remained friends with him, she said: "I wasn't scared of someone making an advance at me or a pass at me."

The defense has pointed out that phone records show Constand called Cosby 53 times after she says he assaulted her. Constand told the jury the calls mostly involved the women's basketball team, especially around tournament time.

"It had more to do with business than it did with me personally," she said.

Constand also said she went to a performance of Cosby's later that year with her family in Canada after Cosby arranged to drop off tickets. She felt "terrible" about it, she said, especially when her mother brought Cosby some Canadian souvenirs.

"It was a very big burden on me, but ... I did not have the courage at the time to tell my family," she said. "So I just went along with them."

The stage was set for Tuesday's courtroom confrontation after prosecutors used the first day and a half of the trial to argue that Cosby made a habit of knocking women out with pills and then molesting them.

Kelly Johnson testified on Day 1 that Cosby drugged molested her at a Los Angeles hotel bungalow in 1996. She said she lost consciousness soon after Cosby pressured her to take a large white pill. She said that when she awoke, Cosby was naked and forced her to sexually gratify him with her hand.

On Tuesday, Johnson's mother, Pattrice Sewell, bolstered her daughter's story, telling jurors that Johnson was distraught during a telephone call in 1996, fearing Cosby was trying to get her fired from her job working for the comedian's agent.

A few weeks later, Sewell said, Johnson disclosed that she had woken up next to Cosby in bed with her clothes askew.

The defense attacked Johnson's credibility over discrepancies in her accounts, including the year it occurred. Cosby grinned at the defense table as she struggled to explain them.

Sewell said they didn't go to police at the time because her husband, a Los Angeles detective, feared the ordeal that would ensue.

"Her father didn't want her to be humiliated and feel shame and embarrassment as he had seen other women go through when they went to the police at that time. He didn't want that," Sewell said.

Johnson told a similar story in 1996, when she gave sworn testimony in a deposition attached to a worker's compensation claim.

Joseph Miller, a workers' compensation lawyer, testified Tuesday he was taken aback when Johnson said she had been drugged and violated by Cosby. He said Johnson made the disclosure while pursuing a claim that she had developed debilitating stress from her secretarial job at the William Morris Agency.

Miller, who represented William Morris in the case, said Johnson was tearful as she described waking up on a bed with her dress pulled down and her breast exposed — details that matched the story Johnson told on the stand.

But Miller's timeline differed from Johnson's. Under questioning from Cosby's lawyers, Miller revealed that his notes show Johnson told him the encounter happened in 1990, not 1996.

Johnson settled her workers' compensation claim for around $10,000, according to Miller.

The Associated Press does not typically identify people who say they are sexual assault victims unless they grant permission, which Constand and Johnson have done.