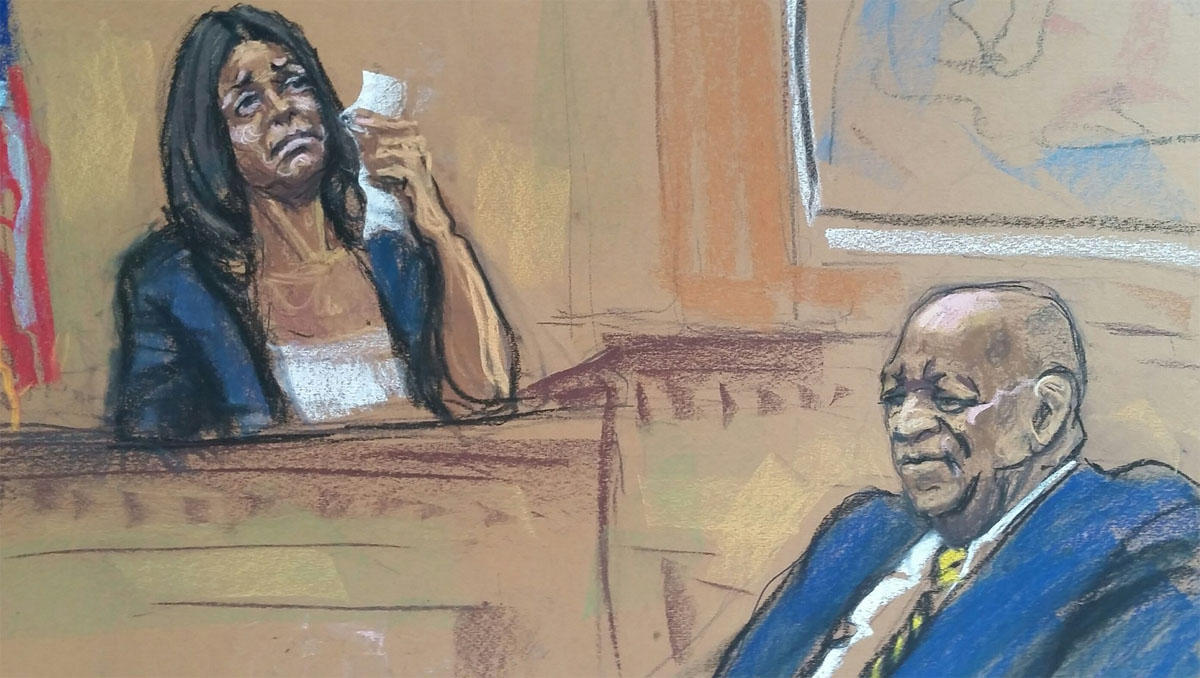 NORRISTOWN, Pa. --  Bill Cosby went on trial Monday on charges he drugged and sexually assaulted a woman more than a decade ago, with prosecutors immediately introducing evidence the 79-year-old TV star once known as America's Dad had done it before to someone else.

The prosecution's opening witness was not the person Cosby is charged with abusing, but another woman, who broke down in tears as she testified that the comedian violated her in the mid-1990s at a hotel bungalow in Los Angeles.

Kelly Johnson of Atlanta worked for one of Cosby's agents at the William Morris Agency. Taking the stand, she described an encounter she said took place in 1996 at the Hotel Bel-Air when she was in her mid-30s.

Johnson wiped back tears Monday, saying she lost consciousness soon after Cosby pressured her to take a large white pill.

Johnson said her next memory was of waking up on a bed with her dress yanked down and her breasts exposed. She said Cosby then put lotion on her hand and make her manipulate his genitals.

"My dress was pulled up from the bottom, and it was pulled down from the top, and my breasts were out," she said, crying. "And I felt naked."

The Associated Press does not usually identify people who say they are the victims of sexual assault, but Johnson's lawyer, Gloria Allred, said her name can be used.

Cosby's lawyer argued that Johnson was seeking a payout from the TV star.

Attorney Brian McMonagle said Johnson mixed up the years and other details of her encounters with Cosby, and he grilled her about why she never said anything when she left William Morris. She came forward in 2015 at a news conference with Allred.

"I felt embarrassed because I had a secret about the biggest celebrity in the world at the time and it was just me, just my word against his, and I was very afraid," Johnson said.

Cosby grinned and tapped his wooden cane as his lawyer questioned Johnson.

Cosby is on trial on charges he assaulted Andrea Constand, a former employee of Temple University's basketball program, at his suburban Philadelphia mansion in 2004. Prosecutors were allowed to call Johnson as a witness because her allegations are similar.

Prosecutors are trying to show Cosby's treatment of Constand fit a pattern of predatory behavior. They had wanted to call as many as 13 women who say Cosby sexually assaulted them, out of more than 60 accusers in all. But Judge Steven O'Neill, in a victory for Cosby, said the jury could hear only from Constand and Johnson.

In her opening statement, prosecutor Kristen Feden noted that the "Cosby Show" star previously admitted under oath that he gave Constand pills and touched her genitals as she lay on his couch.

According to prosecutors, Cosby told Constand, "These three friends will help you relax," referring to the pills.

McMonagle countered by attacking what he said were inconsistencies in Constand's story, disputed that Constand was incapacitated and made the case that she and Cosby had a romantic relationship.

He said Constand initially told police that she and Cosby did not speak after their 2004 encounter, when, in fact, phone records show the two talked 72 times after mid-January — with 53 of those calls initiated by Constand.

Constand, 44, of the Toronto area, is expected to take the stand this week and tell her story in public for the first time.

The jury seated is from the Pittsburgh area, nearly 300 miles away from the Montgomery County courtroom where the proceedings are underway, reports CBS Philly. The trial is expected to last two weeks. Cosby is not expected to take the stand.

Keshia Knight Pulliam, who played Rudy on "The Cosby Show," walked into court Monday with Cosby and told reporters she was there to support him.

"I want to be the person that I would like to have if the tables were turned," said Knight Pulliam, 38. "Right now it's the jury's job and the jury's decision to determine guilt or innocence. It's not mine or anyone else's."

Cosby could get 10 years if convicted.