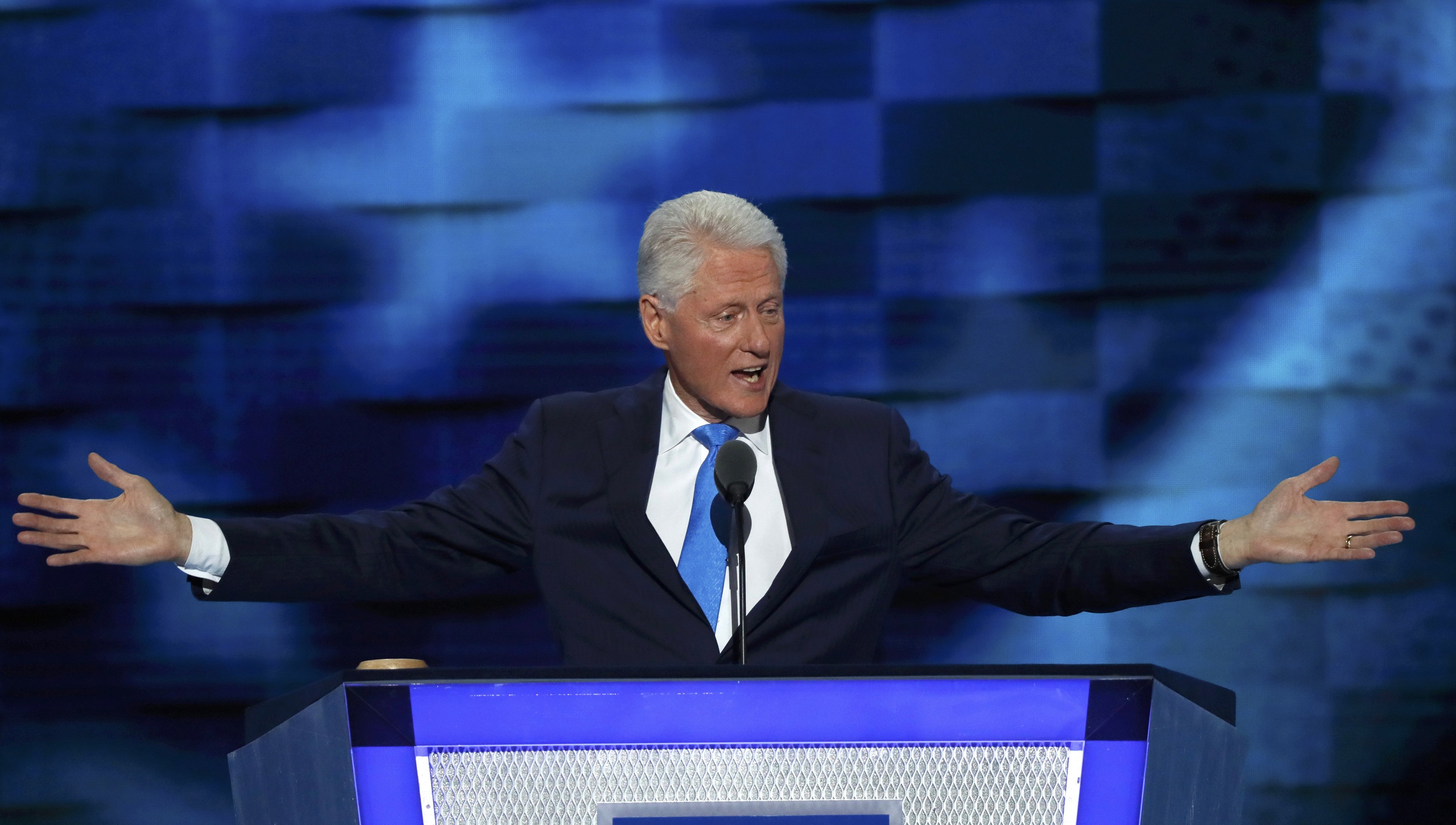 On Tuesday night, he had a different role to play: humanizer-in-chief for his wife, Democratic nominee Hillary Clinton.

The 42nd President delivered a speech to Democratic delegates in Philadelphia that was heavy on biography and the early years of their romance and relationship, pitching Hillary Clinton as someone who has consistently worked for the betterment of others.

And at a time when intra-party tensions are high and she is seen as insufficiently revolutionary for many of the Democrats' most progressive members, Bill Clinton pitched his wife as the "best darn change-maker I have ever known."

Clinton opened his speech by describing the first time he saw Hillary Clinton, then law student Hillary Rodham. "In the spring of 1971, I met a girl," he said. "...She had thick blond hair, big glasses, wore no makeup and she exuded this sense of strength and self-possession that I found magnetic."

He recounted the early days of their courtship, including when she approached him in the law library after he'd spent days staring at her from afar. He finally convinced her to take a walk with him, he said, and "we've been talking and laughing ever since."

"We've done it in good times and bad through joy and heartbreak ... we built up a lifetime of memories," he continued.

Focusing most of his speech on the early days, both before and during the couple's time living in Arkansas and his tenure as governor there, Clinton recounted the ways in which his wife has worked hard to help others at every turn--whether it was by working for Marian Wright Edelman or opening a legal aid clinic in northwest Arkansas.

He explained that he had to ask Hillary Clinton to marry him three times before she finally agreed, and talked about how he made it home from a trip to Washington just in time for her water to break when she gave birth to their daughter, Chelsea.

Bill Clinton has always been a far more natural politician than Hillary Clinton; he looks equally at ease shaking hands in a crowd and delivering rousing speeches on a big stage. Hillary Clinton, by contrast, has always struggled with authenticity; in this campaign, she's faced questions about her trustworthiness.

But in his speech Tuesday night, Bill Clinton worked both to make her relatable and to tout her accomplishments.

"Some people say well we need change. She's been around a long time -- she sure has, and she's sure worth every single year she's put into making people's lives better," he said. "I can tell you this: if you were sitting where I'm sitting and you heard what I have heard at every dinner conversation, every lunch conversation, on every long walk, you would say this woman has never been satisfied with the status quo in anything. She always wants to move the ball forward--that is just who she is."

He said Republicans are working hard to present voters with a "cartoon" version of Hillary Clinton.

"If you win elections on the theory that government is always bad and will mess up a two-car parade, a real change represents a real threat," he said. "So your only option is to create a cartoon, a cartoon alternative, then run against the cartoon. Cartoons are two-dimensional, they're easy to absorb."

"Good for you," he said to the delegates, "because earlier today, you nominated the real one."

He stressed that Hillary Clinton never quits when presented with a problem, saying it will be far more difficult to find solutions if the country makes the "wrong choice" in November.

"You could drop her into any trouble spot--pick one--and somehow, some way, she will have made it better. That is just who she is," he said. "There are clear achievable, affordable responses to our challenges, but we won't get to them if America makes the wrong choice in this election. "That's why you should elect her, and you should elect her because she'll never quit when the going gets tough."