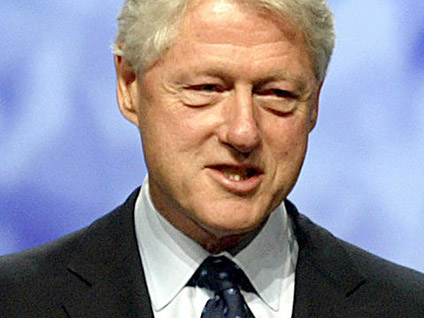 One of the next intra-party battles that the Beltway political watchers have their eyes on is in Colorado. After Rep. Joe Sestak beat incumbent Sen. Arlen Specter in Pennsylvania and incumbent Sen. Blanche Lincoln survived Bill Halter in Arkansas, the next question is can incumbent Sen. Michael Bennet fend off challenger Andrew Romanoff for the Democrat's primary on August 10.

Romanoff is a former state House speaker who won the state's convention to force the primary at the ballot box and he has the support of many party loyalists in the state.

Now he can add one more party figure to the list, Bill Clinton.

Yes, former President Clinton entered the Colorado Senate fray today with an endorsement and fundraising request for Romanoff over Bennet, the sitting senator who has the support of the Democratic party structure, and has already had the current president campaign for him.

"Colorado is far better off today because of Andrew Romanoff's leadership. America will be too," wrote Mr. Clinton.

"As a Senator, Andrew Romanoff will continue to stand up to special interests and fight for working families. We need Andrew's leadership in Washington -- especially now, when so many Americans are losing so much," he continued.

Mr. Clinton says it's the challenger, Romanoff, and not the incumbent Bennet, who can keep the seat in the "D" column in the fall elections. "Andrew brings to this race both an extraordinary record of public service and an extraordinary capacity to lead. I believe that those assets, as well as his deep commitment to Colorado, give him the best chance to hold this seat in November. I support Andrew Romanoff, and I hope you will too,"

Clinton wrote readers to click on a link to "Please make a generous contribution to his campaign today."

For his part, the current president had this to say about the current senator, at a fundraiser in February in Denver: "you've got to have more leaders like Michael Bennet -- because he's determined to break through partisan gridlock to get the tough stuff done."

This race is not without other quirks. Bennet who was appointed to fill the seat left when Ken Salazar joined the Obama Administration as secretary of the interior, is running for election, not necessarily re-election as he's never run for the seat before.

Romanoff was the subject of some DC intrigue, because he had a conversation with White House officials about jobs he had applied for during President Obama's transition, at a time when he planning to challenge Senator Bennet. The speculation was that the Obama White House had offered Romanoff a job in the administration so that he wouldn't run against Bennet, similar to the situation in Pennsylvania with Sestak before he took on and then beat Specter for the Democratic Senate nomination. In fact, Mr. Clinton talked to Sestak last year at the request of the White House about dropping his campaign.

White House Press Secretary Robert Gibbs offered this statement on June 3 on the job issue: "Romanoff said that he was committed to the Senate race and no longer interested in working for the Administration, and that ended the discussion. As Mr. Romanoff has stated, there was no offer of a job."