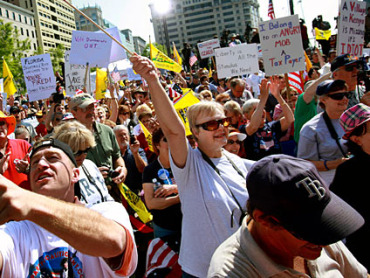 Rep. Michele Bachmann, a Republican from Minnesota, railed against the "gangster government" before thousands of Tea Party protesters on Thursday, but that kind of rhetoric can have serious consequences, former President Bill Clinton said Thursday.

"They are not gangsters," Mr. Clinton said in an interview with the New York Times. "They were elected. They are not doing anything they were not elected to do."

The former president, who was in his first term in office when Timothy McVeigh bombed an Oklahoma City federal building, drew parallels between the anti-government rhetoric being used now and what was being said then. He will speak about the Oklahoma City terrorist attack and its current relevance at a symposium today.

He called McVeigh and his supporters "profoundly alienated, disconnected people who bought into this militant antigovernment line." Furthermore, Mr. Clinton said the Internet has allowed political messages to reach both the "serious and seriously disturbed."

Conservative anger over health care reform did coincide with a rash of threats against members of Congress, and a few people have been arrested for threats against House Speaker Nancy Pelosi (D-Calif.), Sen. Patty Murray (D-Wash.) and GOP House Whip Eric Cantor (R-Va.). The Tea Party movement has said negative stereotypes of the group are not true.

Mr. Clinton said that lawmakers should try harder to distinguish between acceptable dialogue and rhetoric that crosses the line, the Times reports.

"Have at it," he said. "You can attack the politics. Criticize their policies. Don't demonize them, and don't say things that will encourage violent opposition."

At least one Republican is seeking to lower the partisan rancor -- Sen. Tom Coburn (R-Okla.) recently attracted attention for calling Pelosi a "nice lady" and telling constituents to rely on more than Fox News for their information.