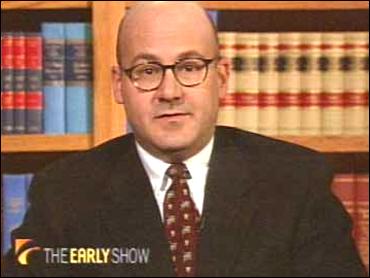 In this legal analysis, CBSNews.com Legal Analyst Andrew Cohen says Timothy McVeigh's lawyers will either have to prove that the new evidence casts doubt on McVeigh's guilt, or that the government committed "a fraud on the court" by withholding the evidence.

Timothy McVeigh came back to the legal system Thursday, almost five months to the day, last December, when he dropped the rest of his appeals and declared that the legal system was a sham. He came back to it with a creative, if not particularly hopeful legal argument. And he came back to it, surprisingly, with his attorneys talking about sensitive their client was to the good folks of Oklahoma City and Terre Haute.

By failing or refusing to hand over potential evidence in time, the government gave McVeigh the legal and political and even moral opening to change his mind and, reasonably enough, he did. Even though the convicted bomber may have been prepared to die before his original execution date of May 16th, as his lawyers claimed Thursday, he apparently isn't willing to give up the fight now with visions of delays and hearings and the like dancing in his head.

So Thursday's filing represents a baby step of sorts for the defense. It is an initial foray into what McVeigh's attorneys hope will be a long, drawn-out, intense and involved process. By merely asking for an indefinite stay and a hearing; by not asking now for a new trial, a new sentencing hearing or any other substantive relief; te defense is trying to ease U.S. District Judge Richard Matsch into this next phase of this saga.

They are trying to make him a senior partner, if you will, in what they hope is a grand journey of discovery through these thousands of pages of information and, yes, perhaps dozens of witnesses. They certainly didn't try to overwhelm with a variety of legal issues and a blizzard of motions and filings.

Of course, some of the reason for this is that McVeigh's attornerys are limited to a few very narrow remedies. Perhaps the main remedy-- and certainly the one upon which the government will focus when it files its response Monday-- is a 1996 federal statute which requires people in McVeigh's position to come to court with, among other things, "newly discovered evidence that, if proven and viewed in light of the evidence as a whole, would be sufficient to establish by clear and convincing evidence that no reasonable factfinder would have found (him) guilty of the offense...' "

Now, you don't have to read that statute very carefully to figure out that Team McVeigh has virtually no earthly chance of offering any evidence which would preclude a "reasonable" factfinder of finding him guilty of the bombing. The evidence against him at his trial was overwhelming, late-produced documents notwithstanding, and McVeigh's public statements in the intervening years certainly have suggested that he is guilty of the charges against him. That's why, tucked away in Footnote 2 on Page 14 of the Petition for Stay of Execution Together With Memorandum in Support, was a significant concession by the defense that "Mr. McVeigh does not have" the "newly-discovered evidence" he needs to fit into the statutory scheme.

Without being able to argue the mainstream theory here, the defense thus has been forced to argue a wild-card. McVeigh's lawyers are claiming that they can ultimately prove (after a stay, and additional investigation, and hearing) that prosecutors essentially defrauded Judge Matsch when they represented to him before and during the trial that all pertinent information had been turned over to the defense.

If they can prove that there has been a fraud on the court, you see, they don't have to mess with that federal statute with the daunting language in order to put their client in a position where he could get some substantive relief. That's the good news for Team McVeigh.

The bad news, of course, is that the defense will have a devil of a time proving a "fraud on the court," especially when there seems to be little proof at this point that the document mishap was anything more than your garden-variety bureaucratic incompetence. These sorts of fraud arguments are almost never successful and you can bet that prosecutors ext week will make the point that the "fraud" argument is just a cheap end run around that statute. On the other hand, it's hard to blame the defense for coming to the conclusion that proving the very difficult, i.e. fraud, sure beats trying to prove the impossible, i.e. McVeigh's innocence.

Legal analysis aside, what Thursday's maneuverings really mean is that the case now will be in a deep freeze of sorts until at least Wednesday morning, when Judge Matsch holds a hearing about what to do next. Matsch likely will rule Wednesday afternoon or Thursday morning and then we all will know whether June 11th, indeed, will be McVeigh's last day on earth.