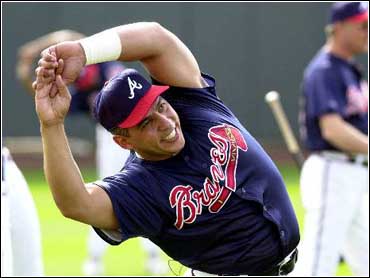 "Not bad, huh?" Galarraga said after homering on eight of 40 pitches on the first official day of spring training workouts. "I wasn't trying to do that. I was just trying to make contact."

Galarraga, who missed all of last season after cancer was discovered in his back, took batting practice for the first time since 1998.

"I didn't know what to expect," Atlanta manager Bobby Cox said at Kissimmee, Fla. "He got tired pretty quick. But he hit the ball really hard. There had to be a couple of 500-foot shots. He's not lacking in strength, that's for sure."

Pitchers, catchers and injured players were allowed to start working out Friday, 45 days before opening day. (The Mets and Cubs, who open the season in Japan on March 29, were allowed to open their camps five days early.)

At Fort Lauderdale, Fla., Ripken showed up early and took batting practice, fielded grounders and ran hard in the outfield. He wasn't even required to report to the Baltimore Orioles' camp until March 1.

"I wasn't having any fun up north," he said. "Normally I like to squeeze out every week of the offseason, but I thought it was important, psychologically and physically, to be in an environment that was fun. I'm just glad to be in uniform, glad to be here and happy to be around the guys again."

Ripken hit .340 with a .584 slugging percentage in 1999, both career highs, but he twice was placed on the disabled list because of back pain and appeared in only 86 games. That made it a disappointing season for the man who played in a major league record 2,632 consecutive games from 1982-98.

He voluntarily cut his season short, missing the final 13 games after deciding to have back surgery on Sept. 23. At the time, Ripken had 23 hits in 17 games following a month-long stint on the disabled list and appeared set to join the 3,000-hit club in 1999.

"Earlier in my career, I played through bumps and bruises," baseball's Iron Man said. "I didn't really understand what could sideline me. Now I know I want the best chance to compete and play egularly. Last year, I missed 60-plus games and that's not acceptable."

At Bradenton, Fla., Kendall stepped onto a baseball field for their first time since his right ankle was nearly torn off in a frightful accident. He didn't favor the ankle or limp even slightly as he shagged fly balls, warmed up pitchers and knocked several balls over the left-field fence on the first day of the Pittsburgh Pirates' camp.

The day was so uneventful and so boring, he almost forget his right ankle was so badly injured as he tried to beat out a bunt July 4 against Milwaukee that some wondered if he would ever play again.

In one of baseball's most gruesome on-field accidents in years, the four ligaments that attach the ankle to his leg snapped, causing his fibula to puncture his uniform pants. As he lay writhing on the field in severe pain, doctors said only his skin held his ankle onto his leg.

"It was nasty, and there are a lot of people in my family that still can't watch it," said Kendall, the son of former catcher Fred Kendall. "It was a gruesome thing. I just hope I'm not remembered as the guy who put his foot on backwards."

The Athletics were busy adding Jeremy Giambi, who hit .285 in 90 games as a Royals rookie last season. At 25, he's four years younger than Jason.

Laxton made his major league debut with the A's last year and went 0-1 with a 7.45 ERA in three appearances, including two starts. The right-hander spent the rest of the season in the minors.

In other news, Tony Gwynn turned down the San Diego Padres' offer to add an option year to his contract.

"We have not heard back from them since," his agent, John Boggs, said Friday. "We are at what you would call an impasse."

Gwynn, eligible for free agency after the season, wants an extension from the San Diego Padres in place before opening day and at a substantial raise. He said that if he doesn't sign an extension with the Padres, he would consider signing with an AL team and becoming a designated hitter.