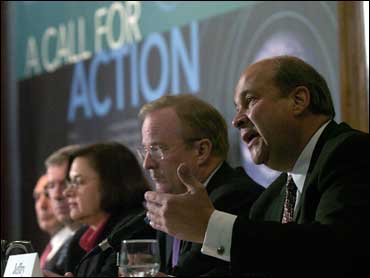 An unusual coalition of some of the country's top corporate earners and several environmental groups has called on President Bush to enact mandatory reductions in carbon emissions to combat global warming.

Caterpillar Inc. and other U.S. manufacturers could lose business to foreign competitors if the Bush administration fails to enact the reductions in pollution, the Peoria-based company said Monday.

"We felt it was better to be in the formative stages of this legislation and have a constructive voice. ... You could cost yourself out of the market if you aren't careful," Owens said in a telephone interview after the proposal was unveiled at a Washington news conference.

Owens said corporations can help provide innovative solutions that will improve both the environment and energy efficiency, while also protecting U.S. trade and the nation's economy.

"If we go to the sidelines and leave all of this to partisan politics, the stronger environmental groups will drive legislation which is incompatible with policies we need to support manufacturing in the global marketplace," Owens said.

In a letter to the president, the executives urged Congress to reduce carbon dioxide and other greenhouse gas emissions by 10 percent below today's levels within a decade and at least 60 percent by 2050.

"The time has come for constructive action that draws strength equally from business, government, and non-governmental stakeholders," said Jeff Immelt, Chairman and CEO of General Electric. "These recommendations should catalyze legislative action that encourages innovation and fosters economic growth while enhancing energy security and balance of trade, ensuring U.S. leadership on an issue of significance to our country and the world."

President Bush is expected to focus on domestic issues, including the environment, in his State of the Union speech Tuesday night.

But he has refused in the past to enact legislation that would impose mandatory caps on carbon emissions, claiming the move would hurt American business. White House spokesman Tony Snow said recently that Tuesday's speech will not change that stance.

The European Union and a coalition of Southeast Asian countries have signed onto legislation in the past couple of months imposing regional carbon emissions caps.

Whole Foods CEO: "Socialists are taking over"
Thanks for reading CBS NEWS.
Create your free account or log in
for more features.
View CBS News In
CBS News App Open
Chrome Safari Continue
Be the first to know
Get browser notifications for breaking news, live events, and exclusive reporting.