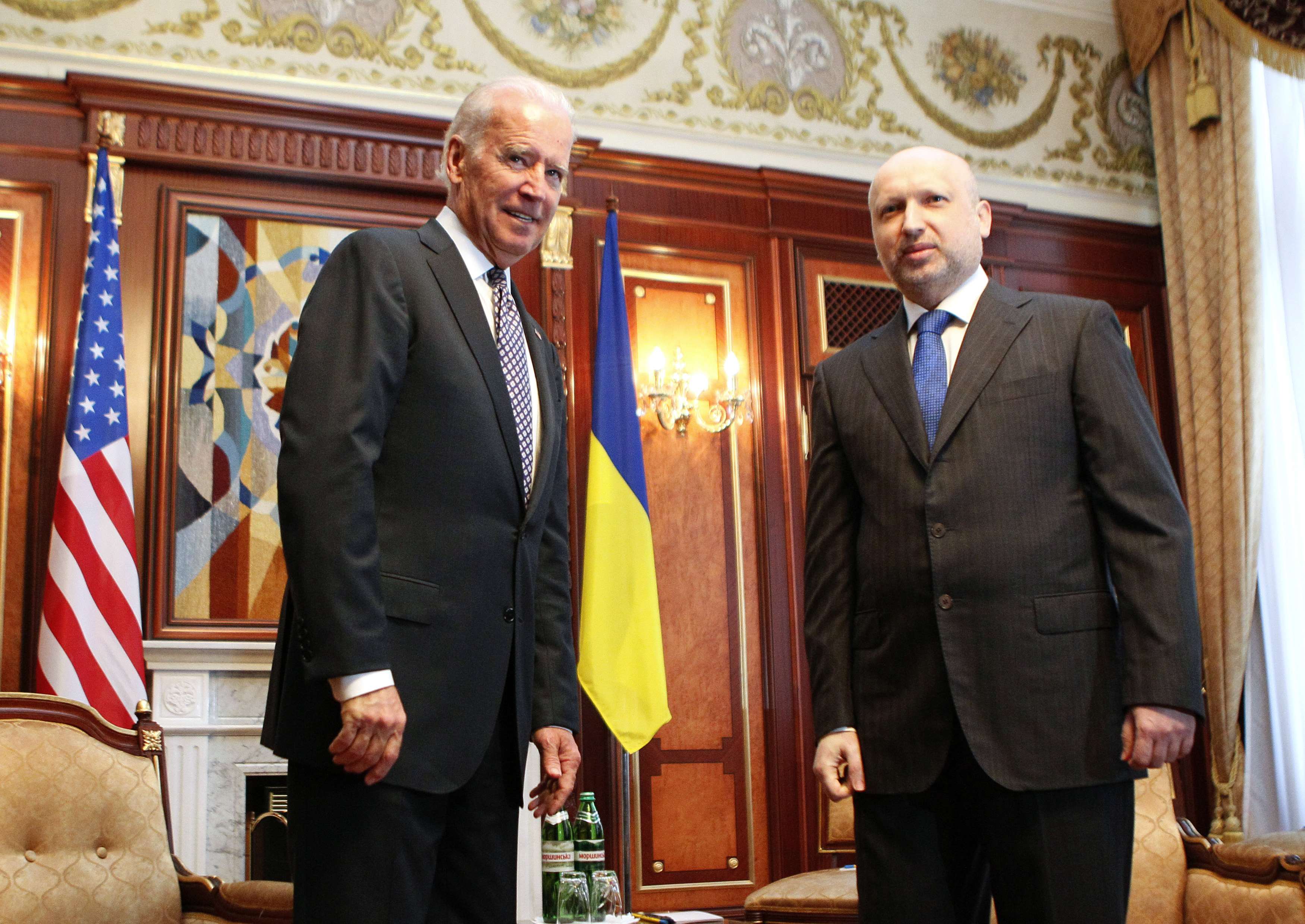 Biden spoke Tuesday after meeting with Ukrainian officials in their capital, Kiev.

The vice president also announced the United States would provide an additional $50 million to help Ukraine's beleaguered government with political and economic reforms.

The money includes $11 million to help conduct the May 25 presidential election, including voter education, administration and oversight. It also will help fund expert teams from U.S. government agencies to help Ukraine to reduce its reliance on energy supplies from Russia. Other technical advisers will help fight corruption.

The White House has also announced $8 million in nonlethal military assistance for the Ukrainian armed forces, including bomb-disposal equipment, communications gear and vehicles.

In the most high-level visit of a U.S. official since crisis erupted in Ukraine, Biden earlier told leaders from various political parties that he brought a message of support from President Obama as they face a historic opportunity to usher in reforms.
"The opportunity to generate a united Ukraine and getting it right is within your grasp," Biden said. "And we want to be your partner and friend in the project. We're ready to assist.
Biden met acting Ukrainian President Oleksandr Turchynov and acting Prime Minister Arseniy Yatsenyuk and democracy activists before announcing the new aid.

The vice president's visit comes at a critical time, days after a tenuous international agreement was reached to de-escalate violence in eastern Ukraine, where pro-Russia insurgents oppose the government in Kiev.

Russia accused the new leaders in Kiev Monday of "crudely" violating the truce agreement, after a shooting at a checkpoint near the flashpoint town of Slavyansk left three pro-Russian militants dead.

"You face some very daunting problems and some might say humiliating threats are taking place," Biden said.

CBS News correspondent Holly Williams reports the Vice President's visit is primarily a show of support for Ukraine's leaders as they struggle with the insurgency in the country's east -- the insurgency the U.S. accuses Russia of instigating and abetting.

In the peace deal brokered by the U.S. in Geneva last week, Ukraine's government offered amnesty to the militants if they laid down their arms and left the public buildings they've occupied. But they have refused to budge.

Williams reports that the separatists are Russian-speaking Ukrainians who have demanded a separate state, or at least greater autonomy for the eastern region of the country.

Ukraine's government has distributed photos, however, which they say show Russian operatives are helping the domestic dissidents, including one man identified by Ukraine as an officer with Russian special forces -- an expert in sabotage.

Williams and her team believe they spotted the same man in the town of Slavyansk last week on the back of a tank loaded with pro-Russian militants, though CBS News could not confirm his identity.

In a very loosely veiled reference to the alleged Russian troops in eastern Ukraine, Biden urged Russia to "stop supporting men hiding behind masks." Russian President Vladimir Putin flatly denied that any of his special forces were in eastern Ukraine in a live television appearance last week, dismissing the claims as "nonsense."

Biden told the lawmakers a priority for the U.S. is to help them become independent from Russian energy supplies. "Imagine where you'd stand today if you could tell Russia to keep your own gas," Biden said.

Biden said they have an historic chance now that former President Viktor Yanukovych has fled the country. "This is a second opportunity to make good on the promise of the Orange Revolution," Biden said in a reference to 2004 protests that overturned a widely criticized election that had given Yanukovych the presidency. Yanukovych later took office but left the country after violent protests in February.

Biden added, "You have to fight the cancer of corruption that is endemic in your system right now." He mentioned cleaning up the court system and finding the right balance of power between the president and Rada.

But he added that the upcoming election may be the most important in the country's history. "The truth of the matter is your fellow countrymen expect a whole lot from you right now," he said.