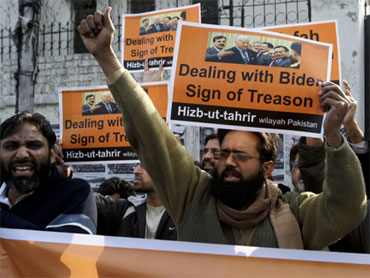 A liberal governor from the ruling party was gunned down last week by a member of his security detail, while the government narrowly avoided collapse when its coalition partners threatened to pull out.

CBS News' Farhan Bokhari reports that the police guard charged with killing prominent politician Salman Taseer was showered with flower petals by Islamic sympathizers after his arrest - another worrying sign that extremist views are increasingly commonplace among members of the Pakistani public.

Ahead of Biden's arrival, a European ambassador told CBS News on condition of anonymity that even with greater U.S. support for Pakistan's leaders, the trends may not change soon.

"The power of the mullahs has been demonstrated recently, more than ever before," said the ambassador. "Salman Taseer's assassination was an unfortunate event, but the extent to which the clergy have subsequently come back with a vengeance is more troubling; like publicly praising Qadri (Taseer's suspected killer) and publicly urging people not to mourn" Taseer.

"I want to know who is in charge; is it the mullahs or politicians who claim to be liberal," said the diplomat.

Washington is committed to giving Pakistan $7.5 billion in aid over the next five years aimed at improving the lives of ordinary Pakistanis. It is also asking Islamabad to step up military efforts against Taliban and al Qaeda militants who use their havens in northwest Pakistan to launch attacks on American and NATO troops in neighboring Afghanistan.

Biden is expected to discuss both elements of U.S. strategy with Pakistani political and military leaders during his brief trip on Wednesday. The visit was not disclosed ahead of time for security reasons, as is common in Pakistan.

U.S. policy makers regard Pakistan as of equal, if not more importance, to America's long-term strategic interests than Afghanistan.

Much of the war supplies for U.S. and NATO troops in Afghanistan pass through Pakistan, and al Qaeda's leadership is presumed to be based in the northwest close to the Afghan border. Islamabad's nuclear weapons mean that Washington cannot afford to destabilize the country, or risk a takeover by Islamists.

While encouraging the Pakistani military to take action against militants in regions close to Afghanistan, the CIA has stepped up its use of drone strikes to target militants in the borderlands over the last year. Earlier Wednesday, one such strike in the North Waziristan region killed four people, intelligence officials said on condition of anonymity because they were not authorized to talk to the media.