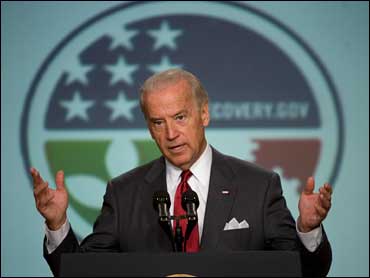 (AP)
Looking to strike fear and compliance in the hearts of local officials, Vice President Joe Biden warns that if they use money from the economic stimulus fund to build what he regards as the wrong kind of projects, "I'll show up in your city and say this was a stupid idea."

"No swimming pools!" he implored. "No tennis courts!" he begged. "No golf courses!" he pleaded. "No Frisbee parks!" he exhorted.

"This can't be government as usual," he told an assemblage of local officials invited to the White House from around the country.

Even if they can promise him that building their projects will create jobs and generate revenue, Biden wants none of it.

He urged the officials to think about how their constituents would react if the projects they launched were plastered on the front page of their biggest local newspaper.

"If it doesn't automatically make sense, don't do it!"

Once the officials get funding for infrastructure, Biden said, they can do what they like with it. But he served notice that if they launch the kind of projects he deems inappropriate, he won't be shy about saying what he thinks.

"I'll show up in your city and say this was a stupid idea," he promised. "You think I'm kidding? This is the only part the president was right about: don't mess with Joe!"

A couple weeks ago, President Obama designated Biden as overseer and guardian of the stimulus bill funds.

"As part of his duty, Joe will keep an eye on how precious tax dollars are being spent. To you, he's Mr. Vice President, but around the White House, we call him the Sheriff -- because if you're misusing taxpayer money, you'll have to answer to him."

"We're not fooling around," he told them.

And it's not just their image that's on the line. "Make me look good, will ya," he joked, we think. "This is all about me."