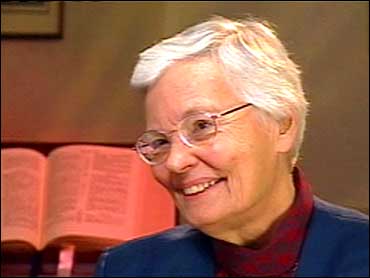 From the Garden of Eden to Abraham, Daniel in the lions' den and the Tower of Babel, the ancient land now known as Iraq is considered the birthplace of the Bible.

Mesopotamia, literally the land between the rivers Tigris and Euphrates, is the reason this land is so lush.

"What we're really on is one of the cusps of the Fertile Crescent," explains Sister Carol Perry, a Bible scholar.

"I think that's part of the reason they put Eden right there," she tells The Early Show co-anchor Harry Smith.

"He came out of Ur, which is in Southern Iraq today. 'He is the first of God's people,'" Sister Perry explains. "Abraham, of course, would father Isaac, who would father Jacob, who would father 12 tribes, and so we have really the beginning of a people here selected out to become monotheists in a world that was multiple deities everywhere."

For Muslims, Abraham is called "Kalil Allah, the friend of Allah," she continues.

Yes Muslims, Jews and Christians trace their lineage back to Abraham and Iraq.

Abraham's home, Ur, is near Tallil in modern Iraq, the site of an airport seized at the beginning of the war.

As troops moved north, they reached the region known millennia ago as Babylon, home to one of the seven wonders of the ancient world, the hanging gardens.

"Babylon has a profound biblical link because Nebuchadnezzar, as King of Babylon, had gone over and conquered Jerusalem," Sister Perry says.

Their temple destroyed, these early Jews were exiled to Babylon.

"I think they had to find their religious roots again because they were a suffering people," she says noting the location is important "because it is there that the Jewish people got a new consciousness of the fact that God wasn't located geographically in Jerusalem, that God could move."

Psalm 137 begins, "By the rivers of Babylon, there we sat down and wept when we remembered Zion."

It was in Babylon that the exiles began to actually write this Psalm and other books of the Bible. "They thought, we had better write this down before it's lost, and so the Hebrew Bible began to be written there."

Daniel, the Bible's great interpreter of dreams, faced the lions here. His friends, Shadrach, Meshach and Abednago walked through the fiery furnace unscathed.

The tower of Babel in Genesis, was likely based on the Ziggurat, ancient Babylonian temples made of clay, with steps rising to heaven.

Today, Northern Iraq is controlled by the Kurds. In ancient times, this area was called Assyria; its capital, across the river from modern Mosul, was called Ninevah.

"The Assyrians were the ones who marched away the 10 tribes from Northern Israel, the 10 lost tribes of Israel," Sister Perry says.

She cries when she looks at the map, she says, "because I can see Abraham and I think of the three great monotheistic religions, which go back to that man. I think of the Jewish people in exile 1400 years after Abraham and finding there the courage and their faith. And to me, it's just devastating to think of it now as a battlefield because it was a place where biblical life was born."

Perhaps in the end it could be a place of peace.

Sister Perry hopes it would be so. "I would hope that the geographical sites that have Biblical meaning could be preserved and developed. I would love to see it as a place of pilgrimage, where Christian, Jew, Muslim - where we could come together to find Abraham, our common father, which would be a wonderful adventure for three great monotheistic faiths. Because they are all born here," she says.