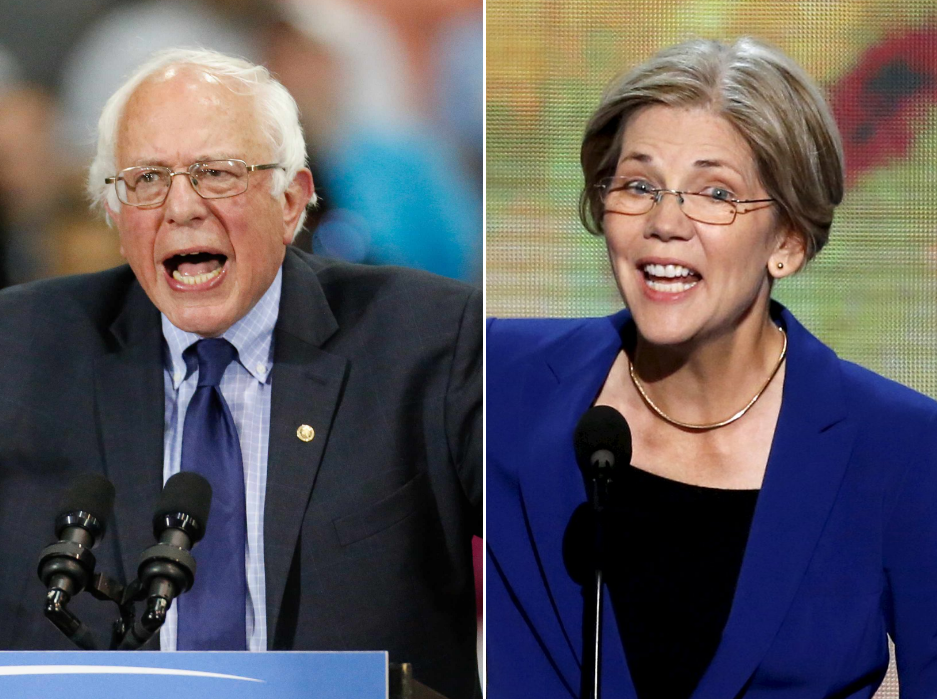 Hillary Clinton dispatched two progressive icons to Ohio this weekend to reverse course with millennials — an increasingly substantial voting bloc that has drifted away from the Democratic nominee.

Vermont Sen. Bernie Sanders and Massachusetts Sen. Elizabeth Warren campaigned on college campuses throughout the state after several polls this week indicated that Clinton’s lead with young voters had nearly evaporated. In Ohio, according to a Suffolk University poll released this week, Trump is even leading Clinton by 11 points, 43 percent to 31 percent, among 18 to 34 year-olds.

Sanders, the overwhelming favorite of young voters​ in Ohio’s March primary, attacked Trump’s campaign for “bigotry” before touting Clinton’s plan to take on student debt and repeated rallying cries to get out the vote on Saturday.

“Eighty-three percent of American families should be able to send their kids to public college and universities tuition free​,” Sanders said to an auditorium filled with students at the University of Akron. “So when you go out and talk to your friends and they say, ‘Oh God I’m not going to vote it’s a waste of time everybody is terrible,’ ask them how much they’re going to leave school in debt with. Ask them about that.”

Warren, meanwhile, electrified a Cleveland crowd with what was perhaps her most forceful and urgent condemnation of Trump to date on Sunday morning.

“Trump has more support from Aryan nation and the Ku Klux Klan than he does the leadership of the Republican Party,” Warren said during an appearance at Cleveland State University. “For years, Trump has led the charge on the birther movement, and only when his handlers tied him down and made him, did he finally admit that it wasn’t true. What kind of a man that does that? A man with a dark and ugly soul, a man who will never be president.”

The Massachusetts Senator also played the part of cheerleader, pumping her fists as she sang praises of Ohio Senate candidate Ted Strickland, who is lagging in the polls behind incumbent Sen. Rob Portman​. Warren shouted “I’m with Hillary,” before urging the group of students, parents and grandparents to register to vote and volunteer for the campaign.

The frenzied crowd reveled in Warren’s flogging of the Republican party. Even actor John Lithgow, the Clinton celebrity surrogate who introduced Warren and Strickland, wanted a selfie with the Massachusetts Senator on the rope line.

Still, support for Clinton’s progressive surrogates in the room doesn’t appear to have translated to real enthusiasm for the Democratic nominee just yet.

“I was an avid Bernie supporter and now I’m undecided,” Ryan Wile, a 20 year-old student from Akron, told CBS News. “I mean, I’m anti-Trump but I don’t know if I’ll vote for her. She flip-flops a lot. I’m leaning her direction but I don’t know.”

Tommy Watral, a 19 year-old student at Kent State University from Mentor, Ohio who served as a delegate for Sanders to the Democratic Convention, flatly stated that he was voting for Clinton because she was the nominee and the alternative to Trump. “That’s just how it is,” he said.

“She’s struggling especially with the youth vote because we have so much access to information so we can look up her voting records and what she has done as First Lady and Secretary of State,” Watral explained of the lackluster enthusiasm.

“But when you actually listen to her, and how she feels about the issues, you realize she is actually working more for younger people than the other candidates,” Miller said.

Nevertheless, the outreach was welcomed by members of the generation that Obama won by 29 percentage points over Mitt Romney in 2012.

“The fact that Sanders is actually endorsing her is really important because I wasn’t really the biggest fan of hers but now that I see that he is going out of his way to promote who she is, I think it’s super important,” said Zach Fradette, a 21-year-old student from Westerville, Ohio.

Brooke Babyak, a 27 year-old Clinton supporter from Akron, Ohio, who was in attendance at Warren’s event in Cleveland on Sunday said Warren’s brand as a champion for young people and infectious enthusiasm would certainly benefit Clinton.

“Warren has a lot of ideas for changing how college is paid for and addressed the issues that younger voters are for,” Babyak said. “Hillary has these same ideas and if they can combine that with the enthusiasm, it’ll help.”

Watral even offered some unsolicited advice for the Clinton campaign with regards to Sanders’ role in the campaign.

“I think he should really just do a college tour until voting day to get college students voting enthusiasm up because now it’s just faltering,” he said.

According to the Center for Information and Research on Civic Learning and Engagement, Ohio, Pennsylvania, Florida and Virginia would have flipped from blue to red without the youth vote in 2012.

Fortunately for Clinton, she has amassed a bench of powerful surrogates who have vowed do whatever it takes to get the former Secretary of State elected.

Clinton’s most popular resource, First Lady Michelle Obama, campaigned with Tim Kaine at George Mason University in Virginia on Friday. There, to chants of “four more years,” she made an explicit appeal for Clinton.

“Let’s be clear, elections aren’t just about who votes, but who doesn’t vote. And that is especially true for young people like all of you,” Obama said. “Without those votes, Barack would have lost those states and he definitely would have lost that election. Period, end of story.”

Supporters and critics alike have suggested that Clinton’s message has been overshadowed by her near constant attacks on Trump. “Millennial voters want to talk about the issues. That’s what will get them to the polls. They aren’t scared of Donald Trump,” Symone Sanders, the Vermont Senator’s former National Press Secretary, tweeted on Saturday.

Clinton is scheduled to give a speech aimed at millennial voters at Temple University in Philadelphia on Monday where she’ll lay out her plans to make debt free college and community college available to students.