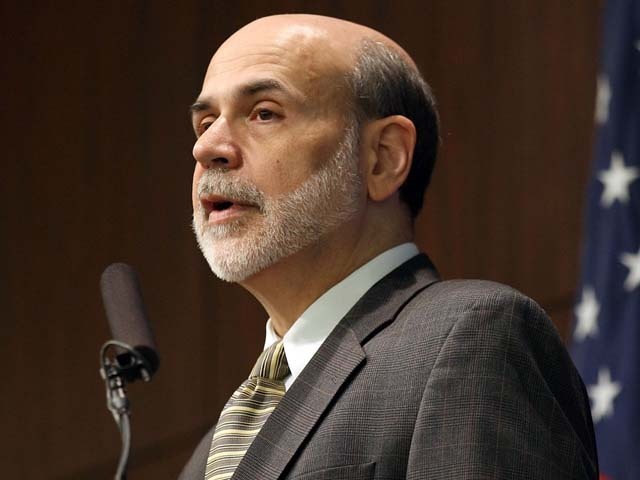 WASHINGTON - Federal Reserve Chairman Ben Bernanke told Congress Tuesday that a prolonged rise in oil prices would pose a danger to the economy. But he said a more likely outcome is a temporary and modest increase in consumer prices not runaway inflation.

Bernanke, in prepared testimony to the Senate Banking Committee, expressed confidence that economic growth would increase this year. But he warned it won't be strong enough to quickly lower unemployment, now at 9 percent.

He also cited other risks to the economy, including rising prices for oil, gasoline, food and other commodities, and further weakness in home prices. All could prompt Americans to spend less.

The Fed chief said the economy still needs the support of its $600 billion bond-purchase program, downplaying runaway inflation risks that others have raised.

"The most likely outcome is that the recent rise in commodity prices will lead to, at most, a temporary and relatively modest increase in U.S. consumer price inflation," Bernanke said in the first of two appearances this week to deliver the Fed's twice-a-year economic report to Congress.

The bond-purchase program is scheduled to end in June. It is intended to spur more spending and invigorate the economy by lowering rates on loans and boosting prices on stocks.

Republicans in Congress and some Fed officials worry that the program could trigger high inflation and a wave of speculative buying on Wall Street that could lead to new bubbles in the prices of assets like stocks and bonds.

Bernanke once again defended the program. He said it is needed to energize growth and reduce unemployment. He blamed the rise in oil and global commodities prices on strong demand from fast-growing countries such as China, not the Fed's stimulus policy.

Gas prices jumped over the weekend to a new nationwide average of $3.37 a gallon 26.7 cents a gallon more than a month ago. Food prices in January rose at the fastest since the fall of 2008.

Political upheaval in the Middle East, Bernanke said, has caused oil and gasoline prices to march higher. However, Bernanke said he and a majority of his Fed colleagues continue to believe that the situation won't lead to out of control inflation.

Workers have little power to demand big pay increases because the jobs market is still weak. Many factories and other companies are operating well below full capacity because customer demand is far from booming. Those forces will prevent inflation from taking off, Bernanke said.

However, a prolonged rise in the price of oil or other commodities would represent a "threat" to economic growth and to inflation, Bernanke acknowledged. The Fed is closely monitoring the situation.

The Fed regularly reviews its bond-purchase program. It could buy fewer securities if the economy were to grow more strongly than anticipated or if inflation showed signs of breaking out. Or it could buy more if the economy was in danger of weakening. Most economists believe the Fed will spend the full $600 billion on schedule.

Bernanke says the sharp drops in the nation's unemployment rates over the last two months were encouraging. But he said it will still take "several years" for unemployment to drop back to normal -- around 6 percent.

"Until we see a sustained period of stronger job creation, we cannot consider the recovery to be truly established," he said.

If gas prices rise to $3.75 a gallon and stay there for a year, it could mitigate the benefit of the Social Security tax cut, economists said. The economy would still grow, but it wouldn't get a boost from people spending more on goods and services.

If gasoline prices went as high as $5 a gallon, spending cuts by consumers and businesses could push the economy into a recession, analysts say.