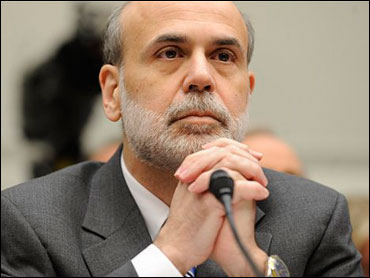 But he was silent on the issue of the Fed losing some of its consumer protection duties, after previously criticizing the Obama administration for its plan to strip the central bank of some of those powers.

In testimony prepared for the House Financial Services Committee, the Fed chief said only that protecting consumers from abusive practices involving mortgages, credit cards and other financial products is "vitally important." In past appearances on Capitol Hill, Bernanke has laid out a spirited defense that the Fed should keep those powers.

Bernanke did lay out a case for the additional power over so-called "too big to fail" financial companies, which could include insurance companies, hedge funds and others beyond the big banks traditionally overseen by the Fed.

As part of a sweeping rewrite of the nation's financial rule book, the administration has proposed tapping the Fed to regulate those companies, and Bernanke said the central bank has the expertise to best carry out those duties.

For both accountability and effectiveness, that power is "best vested with a single agency," Bernanke said. "I believe that the expertise we have developed in supervising large, diversified and interconnected banking organizations ... makes the Federal Reserve well suited to serve as the consolidated supervisor."

To police the broader U.S. financial system for risks, Bernanke supported a council of regulators do that job - also in line with President Obama's proposal.

All financial regulators, Bernanke said, should step up day-to-day oversight and have a big-picture approach in this area.

"To further encourage a more comprehensive and holistic approach to financial oversight, all federal financial supervisors and regulators - not just the Federal Reserve - should be directed and empowered to take account of risks to the broader financial system," he said.

Both Democrats and Republicans have been loathe to give the Fed additional powers. They argue that the central bank failed to spot problems that led to the financial crisis in the first place.