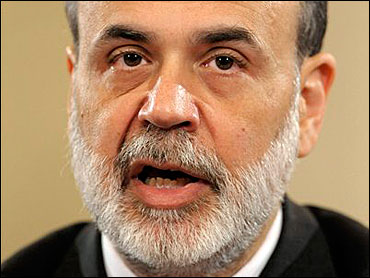 The Fed chief made his remarks to the House Financial Services Committee, his second day on Capitol Hill where he briefed lawmakers on the problems plaguing the economy.

Bernanke appeared amid a backdrop of fading confidence in the U.S. financial system and in the national economy.

The Fed and the Treasury Department on Sunday came to the rescue of mortgage giants Fannie Mae and Freddie Mac, offering to throw them a financial lifeline.

The two companies hold or guarantee more than $5 trillion in mortgages - almost half of the nation's total- and are major sources of financing for the mortgage market. The Bush administration is asking Congress to temporarily increase lines of credit to Fannie and Freddie and to let the government buy their stock. The Fed has offered to let the companies draw emergency loans.

The pledges of aid have raised concerns on Capitol Hill and elsewhere about the government's role in intervening to ease such financial troubles and the risk posed to taxpayers.

The two mortgage giants are "adequately capitalized," Bernanke said. However, "weakness of market confidence is having an effect" on the companies, making it difficult for them to raise capital.

The companies' shares have plunged as losses from their mortgage holdings threatened their financial survival.

The government's rescue plan was intended to send a signal to nervous investors worldwide that the government is prepared to take all necessary steps to prevent the credit market troubles that started last year from engulfing financial markets and further weakening the economy and housing markets.

"We will work our way through these financial storms," Bernanke said.

Treasury Secretary Henry Paulson told Congress on Tuesday that he hoped this lifeline won't need to be used. He said the pledge was aimed at boosting eroding investor confidence in the companies.

Bernanke said the "best solution" is to keep Fannie and Freddie "in their current form" as opposed to having the government take them over. It is also vital for Congress to boost regulatory oversight on the two companies. Such powers are contained in a sweeping housing-rescue package. Congressional leaders plan to add to the bill the provisions Paulson is seeking to aid Fannie and Freddie.

The Fannie and Freddie troubles came on the heels of the failure of IndyMac Bank. Earlier this year, a run on investment bank Bear Stearns pushed the company to the edge of bankruptcy and into a takeover by JPMorgan Chase, backed financially by the Fed.

"How long before we hear a splash? Is there a bottom?" Rep. Emanuel Cleaver, D-Mo., asked of the financial troubles.

Spencer Bachus of Alabama, the panel's most senior Republican, said of the housing boom-to-bust situation: "Fortunes were made on the way up and pain will be felt on the way down."

With the bust, banks and other financial companies have racked up huge losses due to soured mortgage investments. Foreclosures rose to record highs.

For a second day in a row, Bernanke outlined the economy's problems, including a housing slump, financial turmoil, credit troubles and high energy and food prices. And, employers have cut job for sixth straight months.

"Families are facing hardships ... this is clearly a rough time," Bernanke said. "It is clear (economic ) growth has been slow and the labor market is weak. So conditions are tough on average families."

The situation is tough on the Fed, too.

Caught between risky cross currents of plodding growth and rising inflation, Fed policymakers are facing "significant challenges" as they try to find a way to right the economy, Bernanke told lawmakers.

The Fed can't afford to lower rates again to shore things up because it will aggravate inflation. On the other hand, boosting rates to fend off higher prices would deal a setback to the fragile economy and the already crippled housing market.

Against that background, most economists predict Bernanke and his colleagues will leave rates alone when it meets next on Aug. 5.

Democrats in Congress are exploring more economic stimulus efforts to follow up on the $168 billion package, including tax rebates, enacted earlier this year.

Bernanke said it was a "bit premature" to go that route just yet but he didn't rule out such a course of action. He repeated his belief that the most important action Congress could take was to shore up the housing market.

It's difficult to chart a course when uncertainty abounds, Bernanke said.

Over the rest of this year, the economy will grow "appreciably below its trend rate" mostly because of continued weakness in housing markets, high energy prices and tight credit conditions.

At the same time, inflation has remained high and "seems likely to move temporarily higher in the near term," Bernanke warned lawmakers.

On that front, consumer prices jumped 1.1 percent in June, the fastest pace since September 2005, the government reported Wednesday. Another report, from the Fed, showed industrial production rising 0.5 percent in June. However, the increase reflected an end to an automotive production strike rather than any widespread strength in the economy.