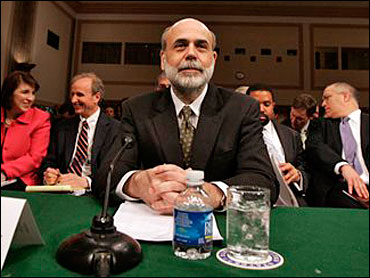 The Federal Reserve moved to assist a Wall Street investment bank on the brink of bankruptcy to prevent a failure that could have dealt serious consequences to the U.S. economy, Federal Reserve Chairman Ben Bernanke said Thursday.

"Given the exceptional pressures on the global economy and financial system, the damage caused by a default by Bear Stearns could have been severe and extremely difficult to contain," Bernanke told the Senate Banking Committee.

Bernanke was the top witness at a hearing called to examine whether the Fed was justified in providing up to $30 billion to facilitate the sale of Bear Stearns Cos. to JP Morgan Chase & Co.

The nation's fifth largest investment bank became the biggest victim of a severe credit crunch that has roiled markets since last August and made it harder for consumers and businesses to get credit.

Democrats on the Senate Banking Committee said they wanted to find out what pressures the Bush administration had brought to close the sale and whether big investment banks were getting preferential treatment over millions of Americans in danger of defaulting on their mortgages.

"Was this a justified rescue to prevent a systemic collapse of financial markets or a $30 billion taxpayer bailout for a Wall Street firm while people on Main Street struggle to pay their mortgages?" Senate Banking Committee Chairman Christopher Dodd asked at the beginning of the hearing.

Dodd said he planned to focus on a period of 96 hours including the weekend of March 15-16, in which the federal government took unprecedented actions to "stabilize our markets, to infuse them with liquidity and to prevent additional firms from being swept under the riptide of panic that threatened to have taken hold."

According to a new CBS News/New York Times poll, most Americans want the government to help homeowners, not banks, reports CBS News correspondent Chip Reid. But critics say the compromise bill now before the Senate does just the opposite - giving banks and homebuilders hurt by the crisis a windfall of $25 billion in tax breaks, while doing little for homeowners.

While members of the panel were generally supportive of the decisions, Sen. Jim Bunning, R-Ky., asked, "How big do you have to be to be too big to fail? ... Who let our financial system become so fragile that one failure jeopardizes the health of the entire system?"

Bernanke said that if Bear Stearns had been allowed to fail, it would have led to a "chaotic unwinding" of Bear Stearns investments held by individuals and other financial institutions.

"Moreover, the adverse impact of a default would not have been confined to the financial system but would have been felt broadly in the real economy through its effects on asset values and credit availability," Bernanke said.

Bernanke testified on a panel that also included Treasury Undersecretary Robert Steel, Christopher Cox, chairman of the Securities and Exchange Commission, and Timothy Geithner, the head of the Fed's New York Regional Bank.

Also appearing before the committee were Alan Schwartz, the head of Bear Stearns, and Jamie Dimon, the head of JP Morgan, who described marathon sessions at both firms as executives searched for the best way out of the Bear Stearns liquidity crisis.

Schwartz told the panel that Bear Stearns was brought down by "unfounded" market rumors that led to what was essentially a "run on the bank" as Bear Stearns creditors began demanding payment out of fears the company was about to collapse.

"Facing the dire choice of bankruptcy or a forced sale under exigent circumstances, we salvaged what we could to avoid wiping out our shareholders, bondholders and 14,000 employees," Schwartz told the panel.

Dimon took issue with reports that the Fed had taken Bear Stearns' riskiest securities as collateral for the $30 billion loan the central bank made to facilitate the sale. He also maintained that a Bear Stearns bankruptcy would have been "disastrous" for the financial system.

"A Bear Stearns bankruptcy could well have touched off a chain reaction at other major financial institutions. That would have shaken confidence in credit markets that already have been battered," Dimon said in his testimony.

"The failure of a firm that was connected to so many corners of our markets would have caused financial disruptions beyond Wall Street," Steel said in his testimony.

Many economists believe the credit and housing problems already have pushed the country into a recession.

Bernanke, testifying before the congressional Joint Economic Committee on Wednesday, raised the prospect of a recession for the first time since the current slowdown began. He said it was possible that the overall economy may not grow at all during the first half of this year. However, he continued to predict that growth will resume in the second half of 2008.

In his testimony, Bernanke said the Fed and other government agencies were informed on March 13 that without help Bear Stearns would have to file for bankruptcy the next day.

As part of marathon negotiations over the weekend of March 15-16, the Fed originally agreed to take $30 billion in securities off the books of Bear Stearns to facilitate the acquisition of the firm by JP Morgan Chase & Co. for a price of around $2 a share. A year ago, Bear Stearns was trading at about $150 a share.

After an uproar over the terms of the sale, the share price was boosted to around $10 and JP Morgan agreed to assume the risks for the first $1 billion in losses that might occur, lowering the Fed's potential risk to $29 billion.

In his testimony Wednesday, Bernanke said he did not believe the central bank would lose money on the deal and said it could make money. He said he did not consider the transaction a bailout because of the losses sustained by Bear Stearns shareholders.

The Fed's regional bank in New York hired BlackRock Financial Management Inc. to manage the $30 billion portfolio of securities the Fed obtained from Bear Stearns. Bernanke said BlackRock was "reasonably confident that we will be able to recover the full amount if we dispose of these assets on a measured basis, rather than sell them all at once."

Large swaths of the U.S. are at risk of blackouts this summer
Thanks for reading CBS NEWS.
Create your free account or log in
for more features.
View CBS News In
CBS News App Open
Chrome Safari Continue
Be the first to know
Get browser notifications for breaking news, live events, and exclusive reporting.