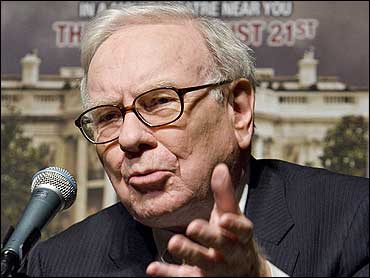 Warren Buffett's Berkshire Hathaway Inc. has reported a 62 percent drop in its 2008 net income because investment and derivative losses of nearly $7.5 billion weighed on the results.

Berkshire's book value declined only one other time under Buffett, and that was a 6.2 percent decline in 2001.

Two analysts surveyed by Thomson Reuters on average expected Berkshire to report a 2008 profit of $5,534.50 per share.

Buffett said he made at least one major investing mistake last year by buying a large amount of ConocoPhillips stock when oil and gas prices were near their peak.

Buffett said he also spent $244 million on stock in two Irish banks that appeared cheap. But since then, he's had to write down the value of those purchases to $27 million.

Buffett said all kinds of investors finished 2008 bloodied and confused because of the dysfunctional credit market and other financial turmoil, and that the economic environment made many people adopt a creed he used to see on restaurant walls years ago. That creed was: "In God we trust, all others pay cash."

But Buffett remains optimistic about the country's future. He said America has faced bigger economic challenges in the past, including two World Wars and the Great Depression.

Buffett says he's certain "the nation's economy will be in shambles throughout 2009," but that America's best days remain ahead.
By AP Business Writer Josh Funk