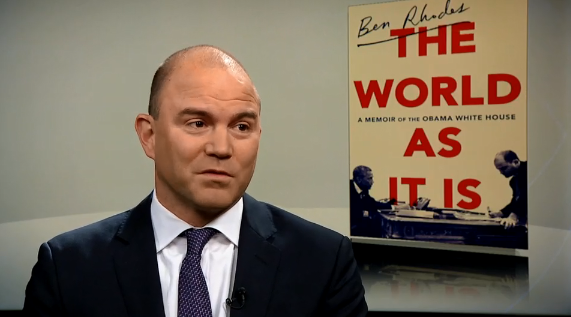 Ben Rhodes, who served as President Obama's campaign speechwriter and later his deputy national security adviser, said Monday that he would be "surprised" that a private intelligence agency with ties to the Israeli government were "somehow operating without the knowledge of the Israeli government." Rhodes said in an interview Monday night on CBSN's "Red & Blue" that the group, Black Cube, was involved in collecting information about former President Obama and some officials.

Black Cube was accused in May of using false identities to seek damaging information about former Obama administration officials. It was reported that it helped the Trump administration undermine the Iran nuclear deal -- something that Rhodes helped craft.

Rhodes is currently promoting his memoir, "The World as It Is: A Memoir of the Obama White House," which chronicles his time in the Obama administration.

He wrote several times throughout the book about the contentious relationship between Obama and Israeli Prime Minister Benjamin Netanyahu.

"All I know is that I would be very surprised if a group of former Mossad agents are somehow operating without the knowledge of the Israeli government in some fashion," he said. "I know how intelligence operates -- and again it's hard for me to fathom a scenario where ... the Israeli government didn't know it was going on."

"The U.S.-Israel relationship is so important ... the politics should be adamant," Rhodes added. "I do think it's important that this shouldn't happen and I wouldn't like it if a bunch of former CIA people were trying to dig up dirt on Israelis. I think this is crossing a line that's blending potentially politics and national security in a way that in the long term is not good for anybody."

In a statement sent to CBS News on Tuesday morning, a public relations company representing Black Cube said it was Black Cube's policy not to comment on "speculation made with regard to the company's work," but adding that, "Black Cube has no relation whatsoever to the Trump administration, to Trump aides, to anyone close to the administration, or to the Iran Nuclear deal. Anyone who claims otherwise is misleading their readers and viewers."

The statement added that, "Black Cube always operates in full compliance with the law in every jurisdiction in which it conducts its work, following legal advice from the world's leading law firms."

Watch Ben Rhodes' full interview from CBSN's "Red & Blue" in the video player at the top of the page. See part two of his interview Wednesday night at 9 p.m. ET on CBSN.