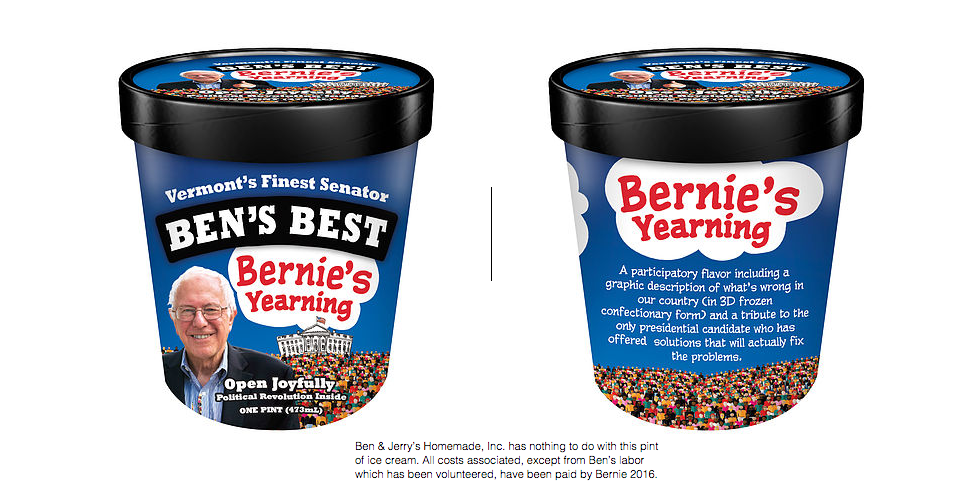 The tagline: "Nothing is so unstoppable as a flavor whose time has finally come"

Cohen has talked about the prospect of creating a Sanders-themed frozen treat for several months now. On the website www.berniesyearning.com Cohen unveiled pictures of the new ice cream and said he's made 40 pints, 25 of which were donated to the Sanders campaign. People can enter a contest to win the remaining pints, which will be autographed by Cohen himself.

Here's how the flavor is described on the carton:

"The entire top of this pint is covered with a thick disc of solid chocolate. Underneath is plain mint ice cream. The chocolate disc represents the huge majority of economic gains that have gone to the top 1% since the end of the recession. Beneath it, the rest of us."

There are also eating instructions:

"1. Take back of spoon and whack huge chocolate disc into lots of pieces. 2. Let the ice cream soften up a bit, mix the pieces around - and there you have it, Bernie's Yearning. 3. Dig in, and share it with your fellow Americans!"

The carton also features a picture of Sanders' face with the words "Vermont's Finest Senator" emblazoned across the top - a play on the usual, "Vermont's Finest" that appears on each pint of Ben & Jerry's. It's also labeled "Ben's Best," rather than the usual name.

Below Sanders' picture, it says, "Open Joyfully. Political revolution inside."

A note on the side of the container says it's "A participatory flavor including a graphic description of what's wrong in our country (in 3D frozen confectionary form) and a tribute to the only presidential candidate who has offered solutions that will actually fix the problems."

"Jerry and I have been constituents of Bernie Sanders for the last 30 years," Cohen wrote on the site. "We've seen him in action and we believe in him."